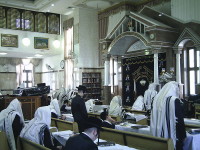 BY Rabbi Yair Hoffman for the Five Towns Jewish Times


The halacha discussed in this column can place a number of people in an awkward situation. Nonetheless, it is an area of halacha that cannot be ignored.

But first, a brief introduction:

There was once a minyan for an aveil somewhere in Suffolk County. There were only ten people present; one of them was a rav. The rav realized that the minyan was barely a minyan and that one of those who were gathered was not qualified to be counted for a minyan. The rav announced that there are some 24 situations in which a minyan requires eleven men, not ten, and that this was one of those times. After trying for an eleventh for the next 15 minutes or so, the gathered people left.

Why was one of them not to be counted? One of the ten people was a member of Jews for J. The Mishnah Berurah rules that such a person is ineligible to be counted.

Of Spies And Heretics

I once had a remarkably fascinating conversation with my rosh yeshiva, Rav Henoch Leibowitz, zt’l, regarding Rav Moshe Feinstein zt”l’s understanding of the Gemara in Arachin (15a). Rav Moshe’s view is discussed in Igros Moshe Vol. I #23 (and other places too). The Gemara states that the spies said the words “Ki chazak hu mimenu.” The Gemara says, “Do not read it mimenu, but render it as mimeno—It is greater than Him.”

Rav Moshe understands this Gemara that—no “ifs, ands, or buts”—the meraglim, spies, were full-blown apikorsim, heretics. And still they are considered an eidah, congregation. From here, Rav Moshe Feinstein extrapolates that in order to be considered an eidah, it doesn’t matter whether or not one is a kofer. A kofer could thus be counted for a minyan, writes Rav Moshe. There is another ramification as well. In order for a person to be considered a public Shabbos violator, there is no need for ten religious Jewish people to be the “public.” Any ten Jews will do.

The Concept Of Dakei Dakos

My rosh yeshiva disagreed with Rav Feinstein on his understanding of the Gemara. He explained that the sin of the meraglim was not true apikorsus, but rather within the parameters of the concept of “dakei dakos”—infinitesimally small and barely detectable. This being the case, there are two ramifications: (1) A true heretic may not be counted; and (2) in order to be considered a public Shabbos violator, it must be that he violated Shabbos in the company of ten Shabbos-observant Jews.

The yeshiva world has always understood the sins that are discussed about the great people in Tanach in a similar fashion, and that the Torah will exaggerate the sin of a great person. Regarding such a great person it is as if a much larger sin was committed. Thus, when Avraham Avinu says the words “B’mah eida ki ershena es ha’aretz,” he was not expressing doubt as to Hashem keeping His promise; he was just asking for the specific sign that Hashem would give him.

Why, then, was he punished? The Alter from Slabodka explains that he was not being sensitive enough to avoid using language that might connote doubt as to whether Hashem would keep His promise. It is this insensitivity to the proper use of language that caused the punishment and our exile into Mitzrayim. This is the concept of dakei dakos.

The Chofetz Chaim, zt’l (Shemiras HaLashon 2:19), great-great-uncle of Rav Henoch Leibowitz, zt’l, has a different understanding of that Gemara than does Rav Moshe Feinstein zt’l. He writes, in contrast to Rav Feinstein: “Certainly, the spies did not deny the power of the Holy One Blessed Be He. Rather, they thought that since for a great matter such as this, to beat out a nation of warriors and giants like these, a miracle would be required, they did not believe that HaKadosh Baruch Hu would perform miracles for the nation of Israel after they had sinned. That which they said, K’v’yachol, ‘He cannot take out His keilim from there,’ their intent was: When does HKB’H drive out a nation (take out His keilim)? When He finds a different one that is better than that one. But after we have sinned great sins regarding the Golden Calf and Basar Ta’avah, He will not have us overcome great nations like these. And that which Hashem promised to give us the land that was only if we merited it in the framework of being tzaddikim.”

The Peninei Tefillah page 125 cites Rav Elyashiv, zt’l, as disagreeing with Rav Feinstein’s ruling of the Gemara in Arachin as well.

Who May Be Counted?

What follows is a listing of who may and may not be counted for a minyan of ten. The rulings may be controversial and perhaps insulting to some. However, they are based on the Mishnah Berurah and the rulings of contemporary poskim, and represent normative Orthodox Jewish law. Of course, one should check with his own moreh hora’ah for halachah l’maaseh.

I. The Basic Category

The basic requirement for being counted in a minyan is to be a male Jew of bar mitzvah age who is of sound mind.

An androgynous person may not be counted for a minyan (see MB 55:3). However, it might be necessary to further define what constitutes a true halachic androgynous individual. The Maharam Shik (Responsum OC 32) rules that under extreme situations (b’sha’as ha’dchak) an androgynous person may be counted in a minyan. When Rav Elyashiv, zt’l, was asked by his son-in-law whether one may rely on the Maharam Shik (Shiurei Torah LaRofin, siman 265), he said that in extreme situations, such as when the minyan might fall apart otherwise, one may rely on it. A tumtum, a person with undeveloped or indeterminable genitals may not be counted for a minyan (SA OC 55:3).

A deaf person who cannot speak, even if he was born normal, may not be counted for a minyan (SA OC 55:8 and BH “Hu”).

A crazed person may not be counted (55:8). However, if he is sometimes normal and sometimes not, then when he is normal he may be counted. There are various views as to what is considered shoteh (crazed).

An intoxicated (drunk or drugged) person who cannot speak before the king may not be counted (MB 99:10).

There is a debate as to whether a sleeping person may be counted as one of the minyan of ten. The Mechaber holds that he can, but the Mishnah Berurah (55:34) cites opinions who rule otherwise. The Mishnah Berurah rules that for zimun and chazaras ha’shatz one should wake at least to the point where he is groggy. For Kaddish and Kedushah we can be more lenient but only if it is just one of them. If there are two people sleeping, they may not be counted. For K’rias HaTorah and Megillah reading, all agree that a sleeping person does not count. For Birkas Kohanim it is unclear.
Someone still davening Shemoneh Esreih may be counted (MB 55:33).

II. Those Whose Actions Exclude Them

What about people who have graduated from places where the denominational hierarchy has views that are in stark contrast to these principles? This author presented the issue to a number of Poskim. The answer was that there are certain institutions where there is a Chazakah that its graduates generally follow the thinking of the institution. Thus, they have ruled that unless one knows for a fact otherwise, the assumption is that the graduates follow the views of the institution.

A public Shabbos violator may not be counted (MB 55:46). Rav Shlomo Zalman Auerbach, zt’l, (Minchas Shlomo Vol. II 4:10) writes that one should avoid doing so. There are those who are lenient when the Shabbos violator would be embarrassed to violate Shabbos in front of a great man (Rabbi Ben Tzion Abba Shaul in Ohr L’Tzion Vol. II #5; see also MB 385:6). This may also be true if they are embarrassed to do so in shul itself.

The Chazon Ish (see Maaseh Ish Vol. II page 93) allowed a Shabbos violator an aliyah to the Torah as well. Rav Dovid Tzvi Hoffmann in Melamed L’Ho’il (Vol I #29) writes that if it is known that the Shabbos violator believes in Hashem, one may rely on the ruling of the Binyan Tzion (Vol II #23) that he does not have the status of a gentile. He further writes, however, if one can avoid doing so by davening elsewhere without embarrassing the person one should do so and not rely upon this leniency.

A child who was raised in a manner where he did not know better and he does not observe Shabbos may be considered as a tinok she’nishba, “kidnapped child,” and may be counted in a minyan, but only if he was not exposed to Torah. Thus, a yeshiva dropout may not be included in a minyan if he no longer observes Shabbos. But a Russian Jew, for example, who was not exposed to a yeshiva education can be counted (Peninei Tefillah citing Rav Elyashiv, page 127).

An onein may not be counted for a minyan if the burial arrangements have not yet been made (MB 55:24, 199:9). He is also not counted for zimun.