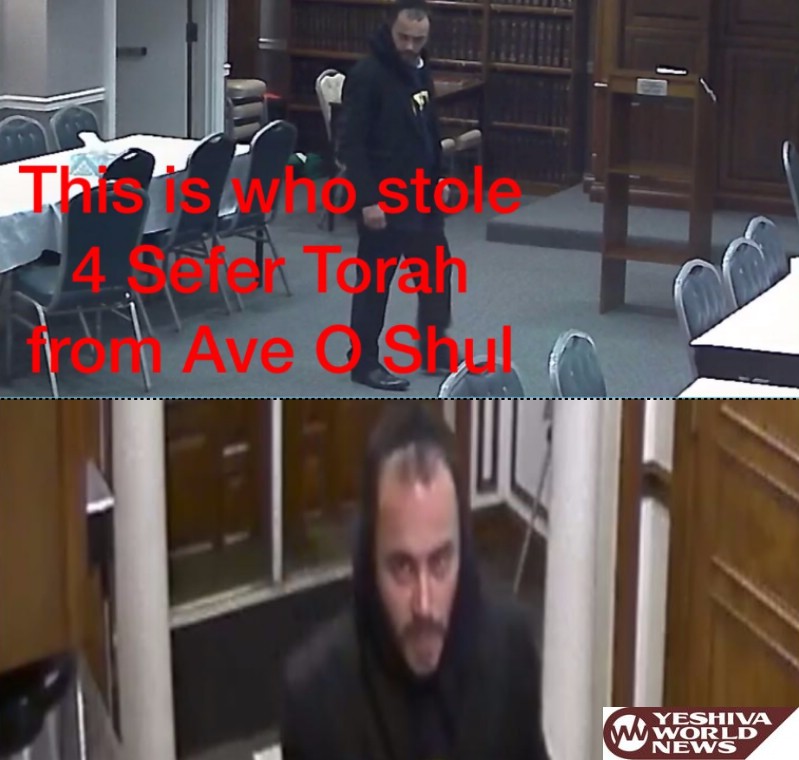 Mispallelim at a Sephardic Shul in Flatbush were shocked to find that multiple Sifrei Torah had been robbed overnight on Simchas Torah.

Four (Sephardic) Sifrei Torah were stolen from the Shul.

Clear photos and video footage of the suspect have been attached to this article.

It is unknown how the suspect gained access to the safe.

NYC Councilman David G. Greenfield announced a $1,000 reward for any information leading to arrest and conviction of the individual responsible for Tuesday’s morning’s burglary.

“It is deeply saddening that such a crime could occur at any time of year, but it is especially upsetting that this took place during the Jewish holiday of Simchat Torah – when Observant Jews around the world are celebrating the annual completion of the weekly reading of the Torah portion,” Greenfield said. “I encourage anyone who may have information about this crime to reach out to the NYPD Crime Stoppers tip line at 1-800-577-TIPS”

The synagogue, located at 808 Avenue O in Brooklyn, was broken into by a white male in his 20s after around 1AM on Tuesday morning. The perpetrator, who may or may not be Jewish, was wearing a yarmulke. Four torahs were stolen in the burglary.

“I will award $1,000 to anyone who provides information that leads to the capture and conviction of the despicable criminal who committed this crime,” Greenfield said. “We will not tolerate this outrageous criminal activity in our community.”

Anyone with information that could help in solving this crime is encouraged call the NYPD’s Crime Stoppers tip line at 1-800-577-TIPS. The NYPD’s 66th Precint and Major Case Squad is actively investigating.

Sources confirm to YWN that NYPD Detectives have several good leads and are aggressively working on the case.