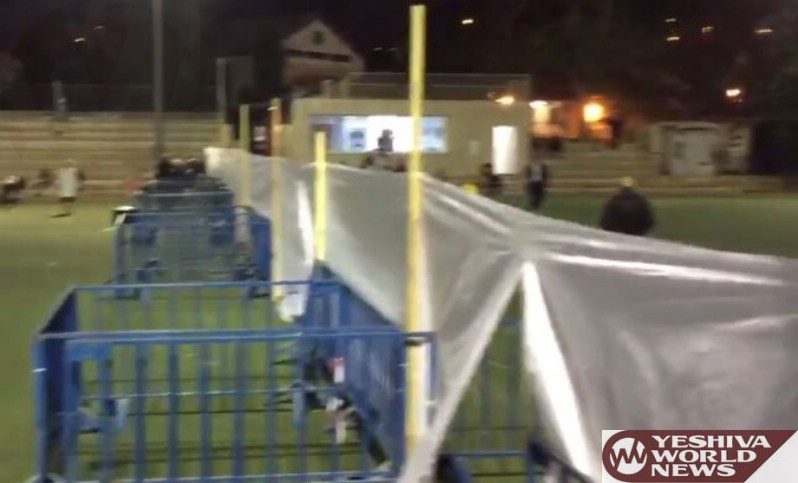 There was anger and confusion in the Nachlaot neighborhood of Yerushalayim on motzei Simchas Torah. Police arrived and delayed the beginning of second hakofos for about an hour due to the presence of a mechitzah.

Both Aaron and Yonatan Razel were on hand to provide entertainment as they do annually, and the fact that hundreds of people anxiously awaited the beginning of the music, police insisted the even was illegal since the vacant lot that was being used is a public area and therefore, ‘excluding women’ is prohibited.

Israel Police chareidi community spokesman Shabtai Gerverchik told Kol Chai Radio on Tuesday morning, Isru Chag, that this is simply not so. Gerverchik explains that the event was illegal because there was no permit and the city engineer did not give his approval. He added the mechitzah was not the issue for police but the rather the lack of openings in the mechitzah, which he explained posed a safety hazard.

However, Deputy Mayor Yitzchak Pindrus views the events somewhat differently, insisting police acted in line with the voices opposed to the gender separation. Ultimately, after some openings were made, police were satisfied and left.

Kol Chai explained there is a document that was released by the deputy State Attorney General Dina Zilber which states a mechitzah is prohibited in any public event since it is discriminatory against women and this is what prompted police to act. Gerverchik insists this is simply not the case as police are not concerned about the presence of a mechitzah but simply wish to make certain the event has a permit and that safety regulations were enforced.

YWN-ISRAEL reported that as this dispute was taking place in Jerusalem, Israel Police Commissioner Roni Alsheich was dancing at second hakofos with ZAKA Chief Yehuda Meshi-Zahav in Tel Aviv, second hakofos that had a separation between men and women too – giving additional credibility to the statements from police spokesman Shabtai Gerverchik, who insists police are were not involved in the matter of gender separation as Alsheich was taking part in the gender-separated Tel Aviv event.