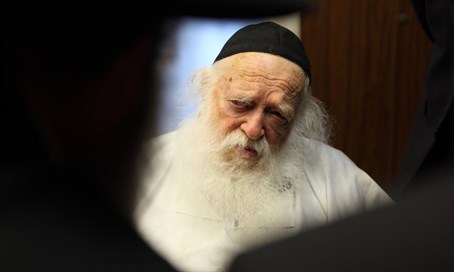 The Rav then visited with others and their family members, all anxious to receive his advice and brachos. One of the cholim is Alexander Zisskind Solomon, who was gravely injured while dismantling a sukka in the home of his parents. Next on the list was avreich Rav Yosef Yomtov ben Yocheved Gitel, a Vishnitzer chossid who was seriously injured on erev Simchas Torah due to a fall in the central Vishnitz sukka. He was also visited by the Vishnitzer Rebbe last week and remains in a medically induced coma to permit his brain to heal from his injuries.

A 17-year-old girl injured in an accident on Ezra Street in Bnei Brak also merit a visit from Rav Chaim Shlita. Rav Kanievsky recited tefilos for a refuah for all of them.

It is reported that in recent months Rav Kanievsky has been visiting children stricken with the ‘machla’ who are admitted on the oncology unit of hospitals in the Gush Dan area accompanied by senior officials from Ezer Mizion.