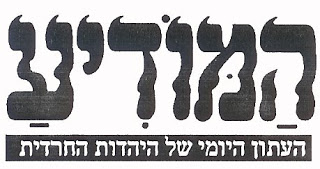 The Hiddush organization, which is aligned with the Reform Movement, issued a statement calling to boycott the Hamodia Economic Conference as the conference is for men only. Following is Hiddush’s statement to the media.

PM Netanyahu, leading ministers and economic leaders are scheduled to participate in an Economic Conference organized by the ultra-Orthodox newspaper “Hamodia,” a men-only conference. Hiddush – For Religious Freedom & Equality wrote to the featured speakers, appealing to them to not attend unless women too are invited.

The ultra-Orthodox “Hamodia” newspaper, the organ of the Agudat Israel political party that sits in the Israeli Government, will hold a conference on “Economics and Business” on Sunday (Nov. 20). The event will only be open to men, and no women will speak from the podium.

In the face of this complete exclusion of women, Hiddush CEO Rabbi Uri Regev, Esq., appealed to conference speakers, asking that they cancel their participation. In his letter, Rabbi Regev wrote, “participating in the conference legitimizes an unacceptable policy, which contradicts the basic values of the State of Israel and helps perpetuate the exclusion of women and undermines gender equality. We urge you to inform the organizers that you will not participate nor speak unless women are invited to attend and join in the discussions.”

Rabbi Regev added that “even if the conference is not ‘illegal,’ you should not give it legitimacy and added weight. Let it be attended only by people who share this regressive worldview, rather than give it higher stature as leaders of Israel’s political and economic spheres. Those who are committed to the principle of gender equality should not set foot there, nor legitimize this unacceptable discrimination; but should rather announce to the public that you will not stand for such exclusion and not give a hand to its perpetuation, and will only participate if it is mended.”

Rabbi Regev noted that the topics of the conference directly relate to women and impact on them, making their participation important not only in a symbolic and abstract way, but also in substance. “Ironically, for example, the sessions dealing with small businesses and education in ultra-Orthodox society should particularly include women, for most ultra-Orthodox workforce participants are women, and women are key players in the Haredi education system.”

In his letter to PM Netanyahu, Rabbi Regev stressed that his and the other Ministers’ participation stands in sheer contradiction to the Government’s March 26, 2014 decision to adopt the Ministry of Justice’s staff report on the phenomenon of the exclusion of women in the public sphere, which was also approved by the Attorney General. In so doing, the government impressively underscored its decision, unequivocally declaring that this “reflects the continued commitment of the Government of Israel to actively deal with this issue. Further incidents of exclusion of women in the public sphere will not be accepted. This decision is intended to ensure that all Government Ministers awaken to this matter and act in the respective fields of their ministries to fully implement…”