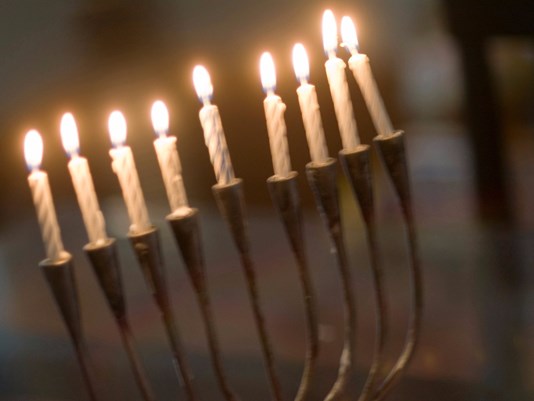 Miami, FL – Although prisoners’ freedom to practice their religion is protected under the Religious Land Use and Institutionalized Persons Act of 2000 (RLUIPA), which enables incarcerated persons to insist on a diet, prayers, and other aspects of their custody to be in adherence with their religious belief, Menorah lightings which involve live flames, matches and combustibles, represent an obvious security hazard, one that many an institution aren’t keen to undertake.

Over the last two decades, the Aleph Institute has been at the forefront of this mission to ensure that prisons, state hospitals and other institutions enable inmates and patients to perform the mitzvah of kindling the Chanukah lights, as is prescribed by Jewish law.

Rabbi Menachem M. Katz, of Aleph, has spearheaded this initiative, and ever since taking his first steps in the Institute in the early ‘90’s he has been going from State to State and institution to institution to see to it that, in addition to the many other Jewish Holidays on the calendar, Chanukah is celebrated consistent with Jewish law. Thanks to his hard work and the work of Aleph, in most Federal facilities Menorah lightings have already been permitted for many years, whereas State and County prisons have proven more of a challenge.

“It’s been a laborious process” says Katz, “Lit flames are the biggest security nightmare in restricted environments such as prisons. So we often need to involve the fire marshals and obtain their approval, and create the appropriate environment for the menorah to be kindled maintaining the safety and security of inmates and staff alike. Sometimes the only place that a facility is able to approve, is the kitchen since open flame is already present from the ovens and stoves.”
Though the work is rigorous, “At the end, prison officials are very impressed with the solutions we can find together.”

“As of today, the only state we have yet to find a viable resolution with, is Connecticut, and we are very hopeful that the many precedents will pave the way for an understanding,”says Katz.

On one occasion, the work to obtain permission from States to kindle the Menorah lights brought together hundreds of Rabbis who met with the Governor to demand that the lighting be permitted, and indeed they prevailed.

Why the insistence? If all mitzvahs are important for a Jew to adhere to and perform, there is special meaning and value to a commandment which is not only symbolically illuminating and warm, but also practically so. In a 1977 letter to Jewish detainees, the Rebbe reflected upon the special relevance the story of Chanukah, as well as the traditions of the Holiday have for prisoners. Among other things, the Rebbe stressed:

“When a person finds himself in a situation of “after sunset,” when the light of day has given way to gloom and darkness — as was the case in those ancient days under the oppressive Greek rule — one must not despair, G-d forbid, but on the contrary, it is necessary to fortify oneself with complete trust in G d, the Essence of Goodness, and take heart in the firm belief that the darkness is only temporary, and it will soon be superseded by a bright light, which will be seen and felt all the more strongly through the supremacy of light over darkness.”

Prison environments can often be cold and devoid of interpersonal warmth, and the Menorah has the ability to return some fortitude and confidence to the often broken spirits of prisoners, fanning the flame of faith and hope.