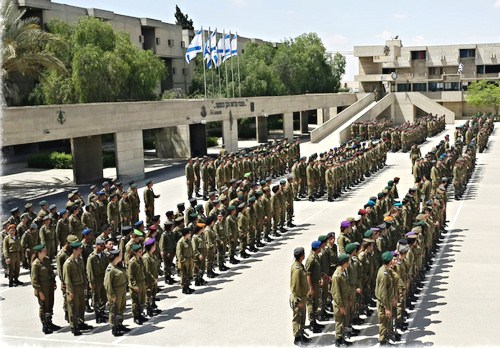 IDF ‘Base 1’ is known to all in the military, the prestigious base where the select few are trained to become commissioned officers. During the past decade or two, with the arrival of the mechina yeshivot on the scene, the number of religious soldiers entering Base 1 has resin significantly as today, a significant percent of new junior officers are religious. The religious presence on this base is a regular event, but now, with the IDF placing an emphasis on mainstreaming women, Base 1 presents serious halachic issues.

Religious cadets have asked to continue training with male instructors but today, they are being told the instructors are women. Some of the mechina graduates admit they were afraid to refuse orders for fear of being ousted from the program, and were then instructed to punch their instructor in the abdomen during training, in this case, a female. They are also being instructed to run and workout together while wearing shorts and tee shirts.

Cadets have been asked to describe the sleeping arrangements and they state R”L this too is the same, without separation. They explain the secular cadets “Hate it too”, adding “we may never enter the female’s quarters but they can come and go from ours are at will”. One cadet explained this includes the shower area too R”L.

One second-lieutenant, a recent graduate explains “there are so many problems, many that one cannot plan for or anticipate ahead of time”. He explains a male and female cadet were sent together to a certain place. there were unexpected delays and the decision was made to instruct them to spend the night in a “Beit HaChaiyal” and return to base the following morning. He adds that on paper it looks okay and we have the right to ask for a great deal but in reality, this is not so and the problems for a religious cadet are far too many. The soldier describes many unacceptable activities that are taking place in showers and elsewhere R”L and there is no escaping the fact the base as it stands is not suited for religious cadets.

YWN-ISRAEL adds that this is far more than just advancing women in the military, but a clear effort to limit the number of future religious soldiers amid a fear the military is becoming too religious and right-wing.