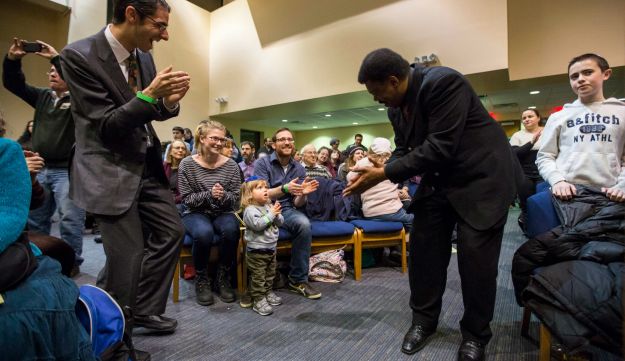 It is now a yearly event, and it is time that a line be drawn.

It is wrong to take a synagogue, to remove the Mechitzos, and to host a party atmosphere with mixed singing and dancing. To have a non-Jewish clergyman from a very different faith lead that singing in a place where the Torah is normally read adds to the shock of it all. To have an entire cadre of female church choir members sing in front of the shul’s Aron Kodesh is the icing on that cake.

In celebrating Martin Luther King Day this year, Rabbi Avi Weiss once again crossed a line. The crossing of the line was that Rabbi Weiss held this celebration within the confines of an ostensibly orthodox synagogue in front of an Aron Kodesh, replete with mixed-gender singing, a mixed-gender choir, and a mixed-gender crowd.

One would be hard-pressed to find a better method to disrespect a shul.

In Shulchan Aruch, the parameters for what is halachically considered darchei emori, following the ways of the gentiles, are either a] origins in Avodah Zarah or b] origins in non-tznius behavior. Not only is this celebration rooted in both of these – the fact that they are happening in front of an Aron Kodesh and on a bima makes it worse than darchei emori.

There is no question that the civil rights movement was a great movement. Hashem created all people b’tzelem elokim and we must remove racism from our midst. And no one is questioning that Reverend Doctor Martin Luther King was a remarkable civil rights leader who fought racism peacefully, touched the hearts of the nation, and changed the face of America -making everyone a better person. But we do not do this at the expense of throwing out halacha and kavod for the last remnant we have of the Beis HaMikdash – the shuls.

Even for the greatest manifestation of redemption from slavery we do not throw out halacha in order to celebrate. Kol Isha? Mixed dancing? Church choirs in shul?

Rabbi Weiss has re-invented his brand of Judaism as a social movement, and while doing so has trampled upon both the sanctity and boundaries of Halacha. This brand of Judaism should not have the word Orthodox in it – because it is clearly and demonstrably not. We should call them something else.

Leaders of his “Open O” movement have openly written their thinking about the text of the Bible that parallels the positions of Reform and Conservative Judaism – but not an orthodox one.

Imagine, for a moment, if the Chief Justice of the Supreme Court of the United States of America celebrated in this manner in the Supreme Court building across from the capitol building in Washington D.C. Certainly the Supreme Court building, with its hallowed halls, bronze doors, and marble facades, requires a certain decorum by virtue of the fact that it is the highest court in the nation and represents the apogee of American judicial jurisprudence. How much more so does a Mikdash me’at, require a sense of awe and majesty.

Many Poskim rule that it is not just the building of the shul, but the very air of the synagogue is infused with holiness. The Gemorah tells us that Rav Yochanan used to actually curse those who profaned the synagogue with matters mundane.

This is not Torah Judaism. It is a manifestation of “feel-good-ism” that allows everything and anything to slowly creep into thousands of years of Jewish tradition. It is a brand of Judaism that adopts and incorporates within it the latest trends and fashions of the society around us.
Rabbi Weiss, you were once a wonderful soul that infused people with a love of Klal Yisroel and of Judaism. You have got to stop this and regain perspective. Use your talents to grow Torah Judaism – not divide it.

Inadvertently perhaps, you have given birth to a movement that rips apart Yiddishkeit from within. Its writings and actions are infused with elements quite foreign to Judaism. Eventually, you will have succeeded in creating yet another schism within Judaism. Is this what you want? Is this your legacy?

September 28, 2020 9:48 pm
0
Data published by Israel's Health Ministry on Sunday shows that the number of confirmed coronavirus cases in Chareidi cities has doubled in the past...