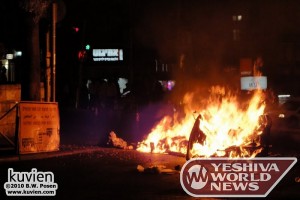 Jerusalem Councilman Yosef Deutsch is addressing reports that repeated calls from residents of Adonaiyhu HaCohen Street, reporting garbage receptacles on fire were ignored for at least 20 minutes, adding the fire station is no more than 3 minutes from the location of the fire.

Deutsch has taken the matter to the city manager, pointing out a disaster could have resulted from the inaction of firefighters. Deutsch quotes residents who explained they phoned the fire department, explaining the blaze was spreading, telling how they were told the matter was being addressed. Adults took matters into their own hands, seeking ways to extinguish the blaze, fearful it would spread to nearby buildings, describing flames reaching 3-4 meters (9-12 feet) in the air.

HaMevaser reports that after speaking with local fire officials, the newspaper was told that city manager, Yair Maiyan instructed them not to respond to fires involving garbage receptacles. It is important to point out that in Yerushalayim, the fire department functions as a city service, under the command of City Hall.

Fire official Assaf Abers is quoted by HaMevaser explaining they were no injuries or other property damage in the garbage bin fires, but this did little to calm angry residents.

Deutsch expressed shock over learning that Maiyan gave such an order, stating despite the property loss resulting in the blazes started by protestors, the city cannot turn a blind eye to its responsibilities to area residents, who suffered as a result of the lack of response by firefighters. He feels City Hall officials and the fire department share in the responsibility with those irresponsible individuals who started the fires. He suggests if they wish to combat the trend they do so within the confines of the law, and not be punishing innocent area residents.

Deutsch was also instrumental in having city sanitation workers clean the frum areas blemished in the recent riots ahead of Shavuos.