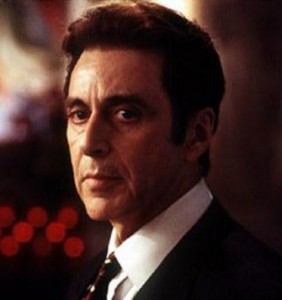 The Wall Street Journal reports: Al Pacino, preparing for the role of Shylock in the Public Theater’s upcoming production of “The Merchant of Venice,” took his research into Brooklyn this week, visiting a Hasidic synagogue in Borough Park.

The actor made the trip with Barry Edelstein, director of the Public’s Shakespeare Initiative, to observe religious Jews in prayer and learn about the community.

Mr. Pacino, dressed in a dark suit and hat, stood at the back of the synagogue and went unrecognized as he observed the morning prayer, said Mr. Edelstein, who wouldn’t name the synagogue at the request of the friend who took them there.

As worshipers swayed in prayer, known as shuckling, Mr. Edelstein said he saw Mr. Pacino slowly rock back and forth with them, observing their movements.

“It was done with complete respect and a true sense of empathy,” said Mr. Edelstein.

Later, Mr. Pacino joined Mr. Edelstein and a man from Borough Park’s Hasidic community for coffee and cheesecake. Diners recognized the actor and asked for photographs, but no one asked the actor what he was doing in their small neighborhood in southwestern Brooklyn, Mr. Edelstein said. No one they encountered appeared to be offended that Mr. Pacino would be portraying the controversial Shylock, a character who has divided audiences over the play’s perceived anti-Semitism, Mr. Edelstein added, saying the man who showed them around the community was planning to see the production.