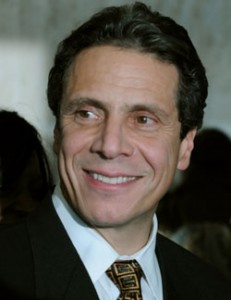 Andrew Cuomo’s war on Albany turned personal Sunday when he snubbed one of the state’s most powerful Democrats: Assembly Speaker Sheldon Silver.

Cuomo kicked off his first full day of campaigning for governor with a parade down Fifth Ave. – and a cold shoulder for Silver.

Asked whether Silver has done a good job, Cuomo refused to directly respond. Instead, he launched into a mini-stump speech about his own accomplishments.

As for whether Silver (D-Manhattan) should hold on to the Assembly’s top job, Cuomo responded only that “it’s not my place” to pick legislative leaders.

“That’s not what I do. I respect the separation of powers,” Cuomo said at the Salute to Israel Parade in Manhattan.

Cuomo, the state attorney general, has made attacks on the Legislature a centerpiece of his campaign – and appeared to be distancing himself from a man who normally would be a key ally.

“If you have elected officials who don’t think we need to reform Albany, then we do have a disagreement, and I’ll be right upfront about that disagreement,” Cuomo said, speaking generally about lawmakers.

Silver later released an effusive endorsement of the presumptive Democratic nominee, calling him an “effective partner in government.”

A Silver spokesman would not comment further on Cuomo’s statements.

The exchange came on the same day Cuomo released a 250-page policy book outlining positions on a swath of issues from ethics reform to downsizing government to same-gender marriage.

Cuomo’s day started with a well-choreographed bang, marching in the parade to the sound of cheers and people chanting his name.

Cuomo got a rousing reception as he marched with his teenage daughter Cara under a huge banner reading “Attorney General Andrew Cuomo.”

The Democrat had a big staff of handlers choreographing his moves and corralling the pack of reporters tailing him.

By contrast, Republican gubernatorial hopeful Rick Lazio strolled along the parade route with one staffer holding a small “Lazio for Governor” sign, barely recognized by the crowd as he marched with other pols.

Lazio, the best known of the GOP candidates, scoffed at the idea of Cuomo bringing a new broom to Albany.

“My biggest challenge is making sure the New York media and press corps hold Andrew Cuomo’s feet to the fire.”

When asked if he would back Cuomo over the Republicans, Mayor Bloomberg claimed to have given the matter no consideration.

“I haven’t really thought about it,” the mayor said.