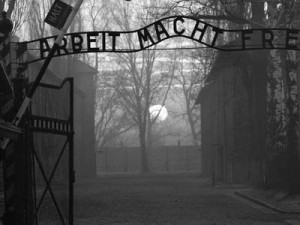 Krakow, Poland – A Swedish millionaire with connections to the neo- Nazi movement has been implicated in last year’s theft of the historic “Arbeit Macht Frei” sign from the Nazi death camp Auschwitz, a Polish newspaper reported Thursday.

The daily Rzeczpospolita  said that Anders Hogstrom, the alleged mastermind behind the theft, pointed to millionaire Lars Goran Wahlstrom as the person who ordered the theft.

Hogstrom, also a Swede, is currently in Polish custody as a suspect in the theft of the sign, which means “Work sets you free.” It hung over the infamous concentration camp, where 1.1 million people – mostly Jews – were killed by Nazis in World War II.

The newspaper reported that Wahlstrom is Hogstrom’s legal guardian and a well-known figure in the neo-Nazi movement.

Prosecutors in Krakow did not confirm the report.

Hogstrom, a former neo-Nazi leader, was arrested in February after Polish authorities issued an international arrest warrant for him.

Three Polish men received jail sentences in connection with the theft, while another two remain in custody on suspicion of carrying it out.

The sign was stolen on December 18 and recovered by police two days later. The thieves defaced the sign and allegedly cut it into three pieces in preparation for shipment.