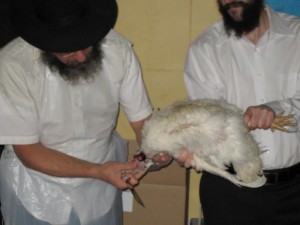 The New Zealand Jewish Community has gained a temporary exemption from a new animal welfare code that had effectively banned kosher slaughter of animals.

The commercial slaughter code introduced earlier this year requires all animals to be stunned before they’re killed.

The Jewish practice of shechita, which requires animals to have their throats cut without stunning, had been allowed under previous animal welfare rules.

The new code meant meat processed according to Jewish religious laws would have to be imported from Australia.

Last week, lawyers for representatives of the Jewish community filed legal proceedings against the Minister of Agriculture, seeking a restoration of the right to practise shechita in New Zealand.

A Jewish community spokesperson, David Zwartz, says an agreement for interim relief from the code was reached in court on Monday which will allow the practice of shechita until the matter comes to trial – likely to be next year.