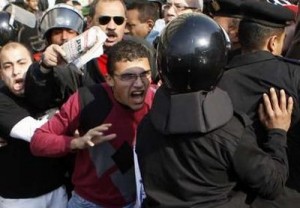 A CNN crew working to cover the clashes between security forces and protesters in Cairo felt the wrath of Egypt’s police on Friday.

CNN senior international correspondent Ben Wedeman said he and photojournalist Mary Rogers were under an overpass and behind a column as protesters and police were clashing.

Plainclothes police arrived, surrounded the CNN team and wanted “to haul us off,” Wedeman said.

“A big struggle began,” he said.

Police grabbed a camera from Rogers, cracked its viewfinder and took the camera away.

Wedeman said the police threatened to beat them.

Wedeman said he urged police to give back the camera to show that Egypt believes in freedom of the press. He said the security forces declined to do so.

Wedeman discussed the incident Friday on CNN’s “American Morning” and on CNN International, providing an account that unfolded between dramatic video footage of police in riot gear, clouds of tear gas and masses of people on the street.

The security forces’ behavior Friday was in stark contrast to their reaction to first day of demonstrations Tuesday in Egypt when officers were relatively restrained, Wedeman said.

In a separate incident, four French journalists were arrested in Cairo, said Bernard Valero, a spokesman for the French Foreign Ministry, but details of their arrest were not immediately available.