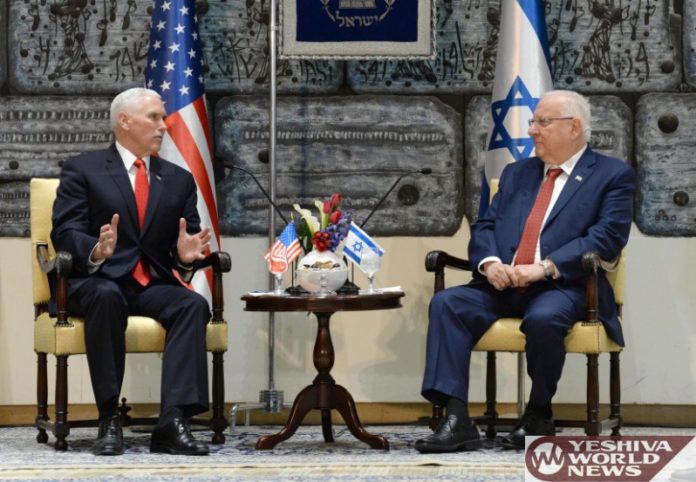 President Reuven and First Lady Nechama Rivlin on Tuesday, 7 Shevat, welcomed to the President’s Residence in Jerusalem, United States Vice President Mike Pence, and his wife, Second Lady Karen Pence on the final day of their visit to Israel.

Mr. Rivlin welcomed the high-level official, saying, “You are very proud, always, to stand very firm behind your words in actions, and for that we have only one word to describe you, you are a Mensch.”

An honor to welcome to the President's Office in #Jerusalem, the capital of #Israel, US @VP & @SecondLady @Mike_Pence & Karen Pence. You are always proud to stand firm behind your words in actions, and for that we have only one word to describe you, you are a Mensch. pic.twitter.com/apvN83CJAR

President Rivlin on negotiations with the Palestinians: “Unfortunately, there is no confidence – without the ability to find a way in order to get to any kind of understanding. They have to understand that the Jewish people have retuned back to their homeland, not as compensation because of the Holocaust, but because it is the land of our forefathers.”

Vice President Pence: “I am very moved by your reflections since I first arrived about what Jerusalem means to peace, the way the people that three great faiths of the world here have lived together in harmony for generations, and President Trump truly believes that the decision of the United States has made to recognize Jerusalem as the capital of Israel, we believe, will set the table for the opportunity to move forward in meaningful negotiations to achieve a lasting peace and end the decades long conflict.”

President and First Lady Rivlin welcomed their guests on the red carpet at the entrance to the President’s Residence, before the two couples met briefly in the President’s private chamber. The President showed the Vice President the pictures in his office of Hadar Goldin and Oron Shaul, who fell in Gaza during Operation Protective Edge, and whose bodies were still being held by the terror group Hamas. They spoke of the duty to bring them home for proper burial, and of the duty to bring home the three other Israeli citizens – Avraham Mengistu, Hisham al-Sayed, and Jumaa Abu Ghanima – being held captive by Hamas in contradiction of all humanitarian principles.

The President and Vice President then rejoined the delegations and gave brief opening remarks to the media.

President Rivlin began by welcoming the Vice President and thanking him for his speech in the Knesset the previous day. He said, “Welcome Mr. Vice President, you are a dear dear friend to the Jewish people and to the State of Israel. We are very proud, and I would like to thank you for your speech yesterday about the strong, the warm and the very special words that you used yesterday in our shrine of democracy, in our parliament, in our Knesset, in Jerusalem the capital of the State of Israel.”

He told the Vice President, “You are very proud, always, to stand very firm behind your words in actions, and for that we have only one word to describe you, you are a Mensch.”

The President went on to explain how his personal and his family’s history in Jerusalem had taught him that it was possible to live in harmony with mutual recognition. He said, “Unfortunately we are now in a sort of tragedy for both of us, they are, most of them, refusing to recognize the very existence of the State of Israel, but we are so very proud as Jerusalemites about the decision of President Trump recognizing Jerusalem as the capital of Israel,” and added, “we appreciated very much and see this as a clear gift on the 70th anniversary of the State of Israel.”

The President stressed, “In spite of the words that President Abbas has used only last week, I must say that we have to continue in order to find a way to build confidence between the two peoples. Unfortunately, there is no confidence. The low confidence that we have is pulling us to live as we live, without the ability to find a way in order to get to any kind of understanding that we are not doomed to live together, it is our destiny. But they have to understand that the Jewish people have returned back to their homeland, not as compensation because of the Holocaust, but we have returned back to our land only because it is the land of our forefathers.”

He added, “We welcome you once again, and we appreciate very much what you are doing for the Jewish people, and what you have done till now and we know what you can do and you will do in the future. Welcome Mr. Vice President, it is a great pleasure to have you with us.”

Vice President Pence thanked the President and said, “We are honored to be with you today at the home of the President and First Lady of Israel and it is deeply meaningful for me to be able to be with you in Jerusalem, the capital of the State of Israel. It was my great honor yesterday to be afforded the great opportunity to be the first Vice President of the United States to address the Knesset and I want to thank you personally for your attendance at my remarks and for your gracious words. Let me say that President Trump’s decision to recognize Jerusalem as Israel’s capital, we hope is the clearest sign yet of the unwavering commitment of the United States of America to Israel. As I announced yesterday Mr. President, President Trump has directed our State Department working with Ambassador Friedman to complete the transition of moving our embassy here to Jerusalem by the end of next year. We look forward to that as a tangible sign of our enduring commitment and alliance to the State of Israel and the people of this great nation. The bond between us, we believe, has never been stronger, but under President Trump’s leadership we are committed to make it stronger still. We have ties, deep commitment to freedom, to shared values, but also through commerce; more than 45 billion dollars in trade takes place between the US, supporting jobs in our country and yours, and our security collaboration have never been more robust. We stand shoulder to shoulder with you in the battle against radical Islamic terrorism and I thank you Mr. President for your government’s courage and for the courage of your military and I pledge to you continued collaboration and cooperation on behalf of our mutual security.”

He stressed, “We also stand together against the threat of the leading state-sponsored terror, Iran. And just know that in President Trump’s recent decision to announce that the waiver that he would sign on sanctions under the Iran nuclear deal would be the last one. We are sending a signal to our European allies that the time has come for changes in the Iran nuclear deal that will ensure that the sunset provisions in the deal are completely eliminated, and that punitive sanctions will be available for many years to come, to prevent Iran from obtaining a nuclear weapon – and you have our commitment to work closely with our allies around the world to achieve that. If our allies will not join us, President Trump has made it clear we will withdraw from the Iran nuclear deal immediately. But we hope in the months ahead to able to strengthen it, to contribute to the security of the region, Israel’s security, and the security of American interests as well.”

The Vice President added, “All of that said, the President also sent me here to reiterate our nation’s deep commitment to peace, and I am very moved by your reflections since I first arrived about what Jerusalem means to peace, the way the people that three great faiths of the world here have lived together in harmony for generations, and President Trump truly believes that the decision of the United States has made to recognize Jerusalem as the capital of Israel, we believe, will set the table for the opportunity to move forward in meaningful negotiations to achieve a lasting peace and end the decades long conflict.”

He concluded, “So let me thank you again for your warm hospitality, we are grateful for your leadership and for your friendship and I look forward to our discussion to explore ways we can make the ties that bind America and Israel even stronger.”

The two went on to speak at length about the current issues in the Middle East, and primarily of the well-being of Jerusalem, as a microcosm of the shared existence in Israel.

The President reiterated his thanks to the Vice President over the United States’ recognition of Jerusalem as the capital of Israel, and stressed that there must not be any doubt about the unification of Jerusalem under Israeli sovereignty, under any peace agreement.

The meeting was also attended by the head of Military Intelligence, Major-General Herzi Halevi, who presented the Vice President with an intelligence review, focused mainly on Iran’s negative influence in the region and on the challenge posed by terrorist organizations, particularly Hezbollah. The meeting also discussed the current situation in Gaza and the need to ensure that the entire world would take responsibility for what is happening in the Gaza Strip and for the actions of Hamas which held millions of Gaza’s citizens hostage.

At the end of their meeting, the Vice President and Second Lady signed the guest book and parted warmly from President and First Lady Rivlin.