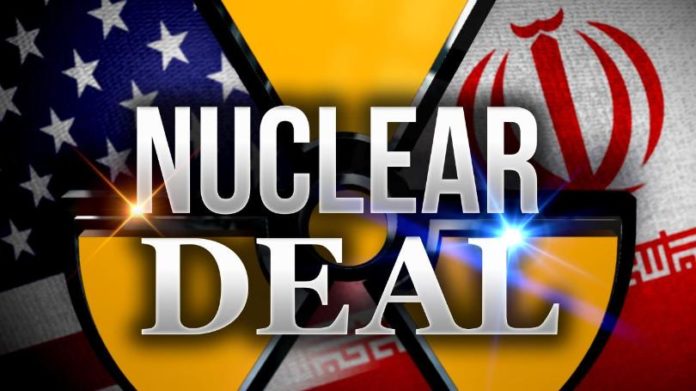 President Donald Trump is set to reveal his decision on whether to keep the U.S. in the Iran deal on Tuesday, a move that could determine the fate of the 2015 agreement on Iran’s nuclear program.

The announcement is set to cap more than a year of deliberation and negotiation that has at time pitted Trump against some of his closest aides and key American allies. Trump is facing a self-imposed May 12 deadline over whether to uphold the 2015 nuclear agreement, which he long has criticized. The president has signaled he will pull out of the pact by the deadline unless it is revised, but he faces intense pressure from European allies not to do so.

“I will be announcing my decision on the Iran Deal tomorrow from the White House at 2:00pm,” Trump tweeted Monday.

I will be announcing my decision on the Iran Deal tomorrow from the White House at 2:00pm.

It is not immediately clear what Trump will announce Tuesday or whether he will announce the end of the deal or push for a renegotiation. Trump in October “decertified” the deal with Iran, but did not move to re-impose sanctions, known as a “snap-back.”

Meanwhile, the foreign ministers of France and Germany say they will hold on to the nuclear agreement with Iran, regardless of the upcoming U.S. decision on whether to nix the deal.

France’s top diplomat, Jean-Yves Le Drian, says the three European countries that were part of the deal — France, Britain and Germany — are committed to maintaining it.

Le Drian said Monday in Berlin that “we will continue it independently of the American decision.”

His German counterpart, Heiko Maas, said Berlin, too, wants to stick by the deal, which he said “makes the world a safer place and without it the world would be less safe.”

Trump has been the subject of an intense lobbying effort by American allies to maintain the agreement, with British Foreign Minister Boris Johnson making a last-ditch appeal to the administration in a visit to Washington this week. European leaders say that they are open to negotiating a side agreement with Iran, but the existing framework must remain untouched for that to happen.

On Monday, Iranian President Hassan Rouhani said Iran would be willing not to abandon the nuclear deal even if the United States pulls out, providing the European Union offers guarantees that Iran would keep benefiting from the accord.

Rouhani said that “what we want for the deal is that it’s preserved and guaranteed by the non-Americans” — a reference to other signatories of the 2015 agreement.

U.S. officials and European allies share the conclusion that the deal, known formally as the Joint Comprehensive Plan of Action (JCPOA), has halted Iran’s development of nuclear weapons. Trump has objected to a sunset provision that would allow Iran to restart some nuclear development in 2025.

Supporters of the deal argue that withdrawing from the JCPOA would undermine Trump’s push for North Korea, which has a far more advanced nuclear program than ever possessed by Iran, to denuclearize. Trump is planning on meeting with North Korea’s Kim Jong Un within the next month.