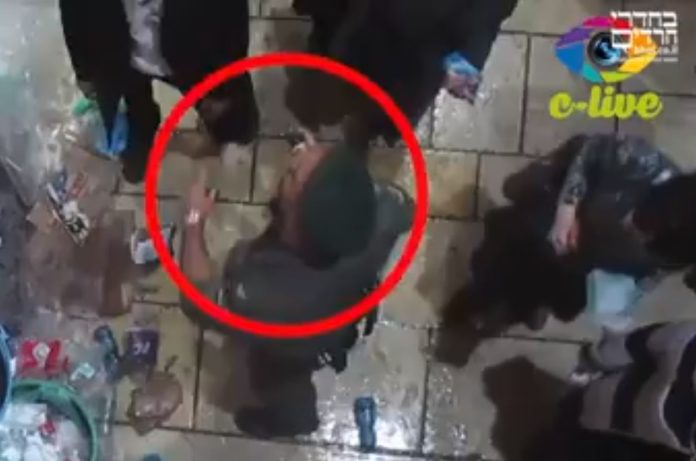 Video of a shocking incident has surfaced days after hundreds of thousands flocked to Meron to spend Lag B’Omer at Kever Rashbi. A border policeman appears to be holding a gas canister in his hand, moments after he directed the pepper spray at several individuals while the masses were singing and dancing.

The incident was first reported by Yaakov Reinitz in Hamodia, with BeChadrei Chareidim later providing the video.

Police later insisted the suspect was not an officer, despite the video clip showing him wearing the dark uniform of the security forces, and testimony from numerous witnesses that was checked and verified.

According to the description of events published in Hamodia, the suspect stood in the inner yard of the Tziyun, in the ezras noshim, near the door/mechitzah, while the band played on the balcony overhead. At some point, the policeman began using forceful crowd control methods against women, when several women objected. It appears he then decided to use the pepper spray, perhaps out of panic because of those shouting at him.

Additional testimony comes from an avreich from Elad, who requested to remain anonymous. “It occurred at 7:45PM, and I was in the yard of the tziyun and was dancing with Am Yisrael. Suddenly, I began to feel a choking feel, and people were beginning to get hysterical, many choking. They all began pushing towards the exit to get out of the area.

“No one really understand at those moments what occurred, and in a matter of second, the yard became a single mass of people that did not succeed in getting out of the area. There was enormous pressure”.

A Chossid with a 2-year-old child beside him, he said: “They are killing people, my son! He cannot breathe.” He further explained that some fell to the ground crying, unable to breathe – young and old alike. “I heard shouts of ‘Shema Yisrael’ and we could not get out of the awful situation”, said the Elad avreich.

The avreich said his glasses fell to the ground and were smashed, while his hat and coat were also lost in the mayhem.

Another avreich, R’ Moshe Landau filed a complaint with the Justice Ministry Police Investigations Unit, detailing the events in a similar fashion. He wrote how the pepper spray had so many choking, unable to breathe, adding it was difficult enough to breathe before the gas due to the volume of people. He adds his 9-year-old son was among the victims as hundreds of people tried to get out of the narrow passageway, albeit without success. “I felt like I was in the gas chamber I visited in Majdanek a few months ago.”

Police are investigating version of events provided by the witnesses, which differs considerably from the version police first received. They add, the video is only a partial representation of the events, and it does not display the entire incident as reported.

Police add the area in question is under 24-hour surveillance and they will get the video footage and eventually, the person responsible will be brought to justice.