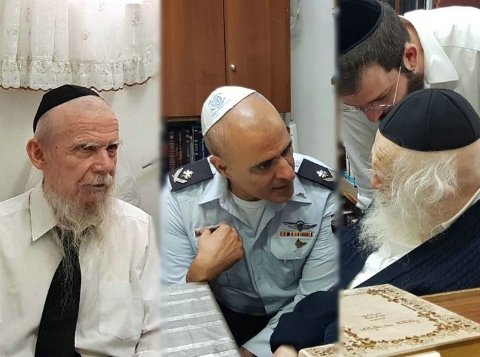 Charedi prisoners in the Israeli prison system have been complaining that they are not allowed to wear hats or suits while inside the prison. Head of the Commissioner’s Office Gondar Ilan Malka, met with Gedolei HaTorah Hagaon haRav Chaim Kanievskey and hagaon HaRav Gershon Edelstein (Rosh yeshiva Ponavezh) in an effort to discuss the situation.

During the visit, Gondar Malka promised that he would work to enable the prisoners in the Torani wards to be able to wear hats and suits in the near future.

Rabbi Edelstein told Gondar Malka that the prison system should put in extra effort to make certain that these prisoners are able to find honest work even after they are released so that they will not return to their lives of crime.

The Prison Service issued a statement prior to the visit stating that the reason why they do not want to allow anyone to wears suits is that they are worried that some inmates might escape and then blend in with society if they are not wearing their uniforms.

BeChadrei Charedim said that after publishing the story, they received a response from the Prison Service that said: “There are no new regulations regarding this issue and the status quo allows Chareidim in prison to wear back pants and a white button-down shirt to Tefilot.