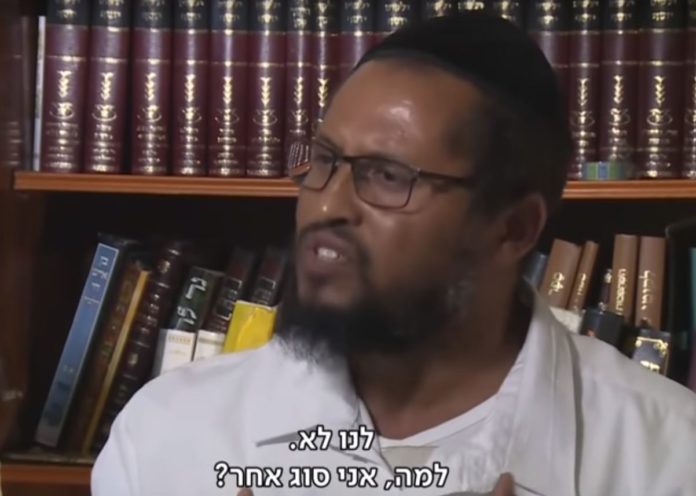 Ori Elmanach, chairman of the workers committee at the Barkan Winery in Shomron explains to KAN News that he touched the wine and a mashgiach from the Eida Chareidis took it and broke the bottle in front of his eyes.

The story begins about a year ago, when the owners of the winery decided they wished to add the Eida Chareidis to the hechsherim on their wines. They Eida demanded the removal of Ethiopian workers from certain areas of the winery. CEO Gil Assulin explains “The situation is not comfortable for me. The situation with the kashrus is most uncomfortable for now, I have to move Yair, an Ethiopian worker, from his task and give him something else to do.”

When asked what the new position is, he explained something not dealing with the filling of the wine bottles, where he was.

We then hear Gil speaking to an Ethiopian employee, explaining that he needs the hechsher of the Eida to sell in a larger marketplace and this is their demands, not that of the winery.

The report then explains that the Yiddishkeit of the Ethiopians is questionable, and therefore, the Eida does not permit them to touch the wine. Journalist Uri Elkayan speaks with the Eida mashgiach in the winery, Aharon, asking him why the policy is so. He explains it is not his policy, directing them to the head mashgiach.

Chief mashgiach in the winery, Yosef Frumowitz explains it is known that some Ethiopians have undergone giyur, while others have not. Due to the safek, they are stringent.

The Ethiopian employees in the winery, who are shomer Shabbos, are asking why they are discriminated against. Tempo, the parent company of Barkan Winery explains that as per the agreement with the Eida Chareidis, only religious Jews may be assigned to certain areas of the winery. About 10% of the employees of Tempo in other lines are Ethiopian.

The Eida told KAN News that due to their commitment to wine consumers who are ‘Shomrei Kashrus’, the badatz is as careful as possible regarding one touching wine who may prohibit it, and this is not done to discriminate against any employee. Three employees were reassigned in the factory to avoid insulting any one employee personally.

Rav Yosef said, “I view with great severity the directive issued by those who call themselves a kashrus body, to disqualify observant Ethiopian workers from manufacturing wine.”

The Chief Rabbi added: “There is no explanation for this directive other than pure racism, and the Ethiopian immigrants are Jews in every respect … It is highly doubtful whether a kashrut body that considers itself as being so strict and harmful to the whiteness and bloodshed of other Jews can be trusted solely because of the color of their skin”

After an outcry by political figures and Israel’s chief rabbi, and calls on social media for a boycott, Barkan announced Tuesday evening that its Ethiopian workers would return to work as usual and not be prevented from coming in contact with its wine.

The employees will return to the their jobs at Barkan on Wednesday morning, Kan reported.

“The Tempo-Barkan group promotes equal treatment and opposes any manifestations of racism or discrimination,” the company said in a statement. “Since we found ourselves in a situation which was not of our making, and understood that we were being dragged into a political [conflict] of one sort or another — and since all our employers are equally dear to us — the director of the company has immediately instructed to not remove any workers from their positions.

“It should be stressed that in any case, even if any workers had been moved from their positions, it would not have impacted their livelihood.”