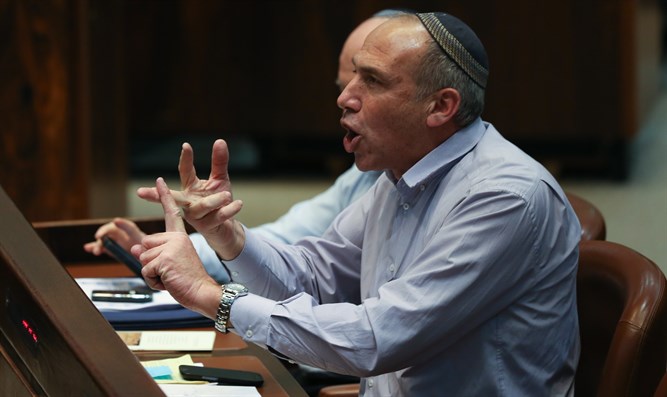 MK (Bayit Yehudi) Moti Yogev lashed out at MK (Arab List) Ahmed Tibi during a Knesset Law Committee session, calling him “terrorist! A supporter of murderers”. The committee was discussing a bill initiated by Yogev, seeking to give priority in state tenders for IDF veterans serving in the reserves.

The discussion became heated, so much so, there were shouts between those in favor and opposed. After MK Tibi shouted, Yogev called him “Terrorist! A supporter of murderers. Go to the Palestinian parliament. That’s where your place is”. Tibi plans to file a complaint with the Knesset Ethics Committee against Yogev.

MK Uri Maklev, who was one of the initiators of the affirmative action law for the chareidi tzibur, claimed that Yogev’s bill harms the chareidi population and eliminates the gain from the amendment to the law that has been approved over the past year.

“It is not right to present the reservists as a weakened population. The reserve service does not detract, but rather leads to prioritizing the experience and other things of the same candidate, in preference to weakening other populations. This proposal will lower those who are already in favor today,” Maklev said.

Yogev explained his bill: “Today, when the Knesset marks the Day of the IDF Reservist, it is a good time to move forward with the law I submitted, to give affirmative action to those who served in the army or reserve duty from groups that receive affirmative action in the civil service. Showing commitment and loyalty to the state, and the state must repay them as a reward. ”

“We want to redress the injustice, to bring equality and to give priority to the civil service tenders to those who serve the State of Israel, to invest the best of his years,” he said, adding: “It is inconceivable that while those who served the best of his years are already entering the world of academia and work, and risk his life for the sake of the State of Israel,” Yogev concluded.