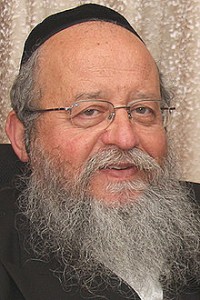 Responding to the address delivered before the Knesset plenum by Yesh Atid leader Yair Lapid, Yahadut Hatorah’s Menachem Eliezer Moses stated, “If we are so compelled, we will all accompany the bnei yeshivos to prison.”

Moses opened his remarks with words of bracha to Lapid, then going on to describe the torch of his lineage, and how the teachings of our yeshivos are adorned by the Torah of those previous generations.

“I heard your first address and how you spoke of the ‘10% which cannot threaten civil war’ as you put it. To my sorrow, you neglected to address the current and future crisis surrounding the bankrupt Israeli education system.”

“You spoke of a future model. I will tell you from the exemplary past of our people and heritage, mine and yours, a past which is our only future here in Israel. Your paternal grandfather David Giladi who was born David Klein in Transylvania, Austro-Hungary, born to your father Shlomo Zalman Klein – a family which had 18 children, a distinguished family, a family that was unashamed of its Jewish roots and its kiyum Torah.”

“This family that came from one of the greats in the last generation, HaRav HaGaon Rav Shmuel Shmelka Klein, rav of the city of Sa’las listed in the encyclopedia among the great ones, known around the world and author of Tzror HaChaim, which was, is and will continue to be studied.”

“Here lies the secret of the Knesset. What we see from here you do not see from there. I was surprised that your address was focused on crisis and a bleak future that stems according to your understanding from a lack of courage of the ruling majority over the minority. You opted to ignore the inequality in the sharing the burden of Jewish education.”

“You opted to stress how the minority controls the majority. I choose, with your permission, to correct you and point out figures that you did not see and that I hope you see. 30,000 open police cases against youths; 60,000 students who use drugs; 200,000 students became intoxicated by ingesting alcoholic drinks — a state of drunken teens; and 2,000 teachers in schools who were assaulted by their students. There are the fruits of the State of Israel’s education system which includes the core subjects.”

“You spoke of the 90% majority which is controlled by the 10% minority. In the education system the majority and minority figures have changed but the funding remains as it was – 90% versus the 10%. The Ministry of Education budget for 2012, the outgoing year, was close to 60 billion NIS of which 5 billion NIS was directed for chareidi education, which represents 32% of the nation’s preschool children and 26% of seventh and eighth graders. This is your exploitation and abuse of the majority by the minority.”

Moses concluded by referring to the sharing the burden issue. “Do you genuinely believe that 100,000 yeshiva students will be forced to recruit? How will you have room for them all in the jails when we don’t even have sufficient housing for young couple? The new government will have to address the fiscal debt. Imprisoning them all will be far more costly to the state. On this note we heard the words of the Belze Rebbe Shlita at the meeting of the Moetzas Gedolei Torah, stating all of us will accompany bnei yeshivos to prison if chas v’sholom they stop the Torah in Israel.”

Moses also warned Lapid, that if the chareidim are really compelled to serve they will bring many soldiers back to a way of Torah “and you will not recognize them when they return home,” advising him to keep them away as not to ruin them in his eyes.