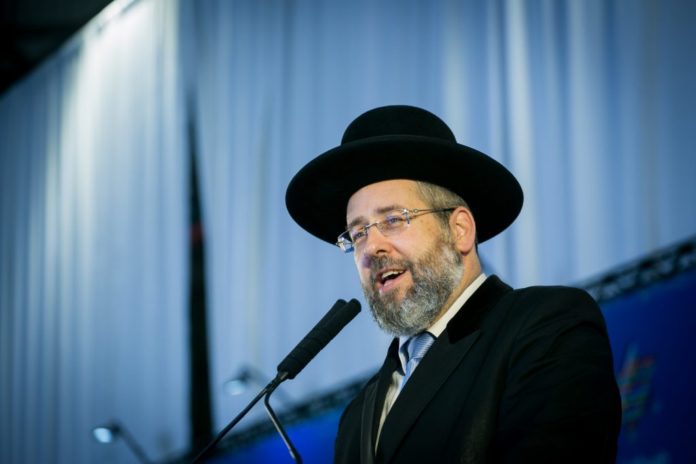 The Chief Rabbinate of Israel explains it will only be accepting giyur from Europe if the beis din is known and approved by the Gavaad of Europe, HaGaon HaRav Ehrentreu. This announcement was made by Chief Ashkenazi Rabbi, HaRav David Lau, who is also the Av Beis Din of the Rabbanut’s Supreme Beis Din at the end of a joint meeting with the Conference of European Rabbis (CER), whose members are currently visiting in Israel.

The background to the rabbis’ visit to Israel appears to be the worsening of relations in Europe between governments and the communities, the increase of persecution of the Jewish religion, the violation of freedom of religion and the observance of its commandments.

The delegation of Jewish leaders, led by the rabbis of the Conference of European Rabbis, sought to attract the attention of the government ministries and the Knesset, and to ask for their diplomatic intervention as well as making its voice heard on issues related to the spirit of Jewish existence in Europe: shechita, milah and education while some countries try to impose their curriculum on chareidi schools who do not wish to introduce the secular subjects, which they refer to as ‘Muktzah Machmas Mius’.

Addressing the Knesset Absorption Committee, HaGaon Rav Pinchas Goldschmidt pointed out that Israel’s voice was only heard following a physical attack, but there was silence regarding attacks against the performance of mitzvos in European countries. He warned this is endangering the ability of Jews in Europe to practice their religion in the future.

Dozens of rabbonim and heads of batei din, dayanim, and other representatives who came from most European countries, headed by Rabbi Goldschmidt, Chairman of the Committee and Av Beit Din of London, Rabbi Menachem Gelley, as well as European parliamentarians and state representatives, and allies of the Jewish People and Jewish leaders from all over Europe held meetings with the Chief Rabbis, the President of the State, ministers and MKs, representatives of the Foreign and Diaspora Ministries and MKs, all towards obtaining cooperation with the relevant ministries and lobby for European Jewry, in order to thwart anti-Jewish legislation in several European countries, to join them in the war against rising anti-Semitism stemming from fundamentalist Islam, the extreme right and the extreme left, and to seek their response and intervention following the harsh treatment of rabbonim and communities in some European countries, culminating in the expulsion of a dozen rabbonim from one of the countries.

During a special session of the Knesset Absorption & Diaspora Committee with the visiting rabbonim; the Rav of Whitefield in Manchester, Rabbi Yonatan Guttentag and Vice President of the CER Rabbi Moshe Lewin, and President of the CER HaGaon HaRav Goldschmidt, called on the Government of Israel and MKs alike to stand at their side and alongside the kehillos of Europe towards cooperating with their rabbonim and leaders, pointing out this is a matter of the existential threats facing them today.

“We, the Rabbis of the European Communities, some 700 Orthodox communities that are conducted according to halacha and include almost all of European Jewry, seek the help of Israel in the face of the constant attacks against the religious commandments that have recently intensified in several European countries and against rising anti-Semitism and the extreme right. We need the involvement and voice of Israel, which affects various countries in Europe to physically protect the communities and will be very effective against anti-Jewish legislation,” Rav Goldschmidt said.

MK Yaakov Asher said, “According to the sad statistics of the assimilation data, the European Rabbinical Conference has proven in its activities that by adhering to the observance of halacha that is dedicated to us from generation to generation, it saves many lives from the phenomena of severe assimilation. We support you further down the road and welcome your activities.”

Committee Chairman MK Avraham Neguise called on the Government of Israel to strengthen the communities, to ensure their safety and to fight with the rabbis against the anti-religious legislation and anti-Semitism: “The communities in Europe have been dealing with severe anti-Semitic incidents of physical assault against community members in recent years. And social networks. The State of Israel must fight modern anti-Semitism in order to ensure the security of the Jewish people, in Israel and in the Diaspora,” he added.

Rav Goldschmidt praised the new laws passed to release agunos, citing 26 women have since been freed of the agunah status.

One of the main topics discussed during the visit by the rabbonim with Rav Lau was giyur, and the fact that of late, the CER learned there were eight requests for giyur in one day as well as 12 divorces performed on another day by ‘rabbis’ who travel Europe to provide their service, in what Rav Goldschmidt calls ‘a flash operation’ of a so-called beis din. Rav Lau stressed the need to “put an end to such actions”, stating firmly the Chief Rabbinate of Israel will not recognize any such conversions from abroad. Rav Lau’s position was applauded by Moscow’s HaGaon Rav Moshe Lebel, stating their council does not recognize the conversions either.

Before departing, the rabbinical delegation was hosted in Bnei Brak in the Merkaz Achim complex after affixing mezuzos to dozens of rooms in the building. Bnei Brak Mayor Avraham Rubinstein and outgoing mayor, Chanoch Zeibert were both present along with other guests, joining in for a festive meal.