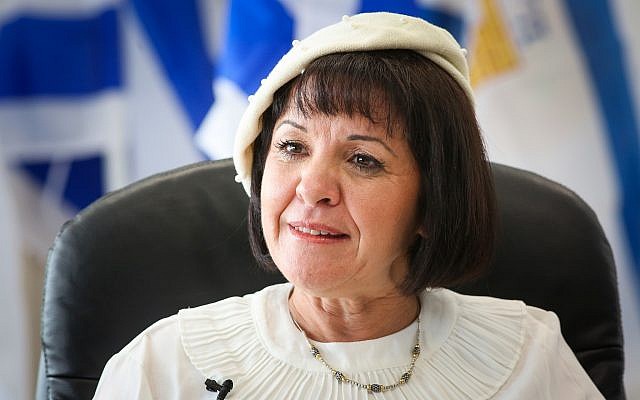 Degel Hatorah is not wasting time, and since it has yet to enter the incoming Beit Shemesh coalition, it is working to neutralize the new mayor, Dr. Aliza Bloch, who is reported to be a political novice. Degel appears to be making an attempt to show the mayor it is better to have the party as an ally rather than in opposition. For now, it does not appear that Dr. Bloch is intimidated – and perhaps, Degel will have to find new ways of dealing with a non-chareidi mayor in a significantly chareidi city after losing the mayoral race.

On Tuesday, Bloch visited a special education facility in the city in a showing of support for the splendid work being done for member of this unique population.

Veteran Degel Hatorah Councilman Moshe Muntag used the mayor’s visit to send a letter to the city’s top legal advisor, explaining “I am not a legal expert” and therefore, he wishes to understand if it is correct for the new mayor to give legitimacy to the school, an institution that was built illegally, questioning if this is proper conduct for a mayor, the city’s top elected official, who is supposed to represent law and order. He questions why she visited a facility lacking operating and other permits, a building that was constructed illegally.

Muntag’s letter led to a storm, with sane persons questioning why he has nothing better to do than cause trouble for a special education facility, as the persons relying on the services have a difficult enough life without him adding to their woes. Critics attacked Muntag, citing there is no shortage of illegal structures in Beit Shemesh, seeking to understand why a sane individual would light a fire under a special education facility.

In what appears to be Degel’s effort to show Mayor Bloch it can play hard ball, newly-elected Degel Councilman Shlomo Brillent was not going to be outdone by his colleague, Muntag, and he sent a letter of his own to the city’s legal advisor, explaining that during the first council meeting with Bloch in charge, he was not given the right to speak as regulations compel the mayor to do. Brillent explains others had the floor for the regular allotted amount of time, while he was only given three minutes, making a point of stating this contradicts regulations for such meetings, as if the legal advisor is unaware of this. Brillent is good enough to cite Paragraph 34 of the bylaws set the permitted speaking time at five minutes, but he was only permitted to speak for three and he feels making an issue of his lost two minutes is the correct way to begin under a new administration. Since he was cut short at the council meeting, he did not receive a response to his question during the meeting, but he was told his speaking time was being limited. With municipal elections and campaigning in the past, Degel officials may just be bored and they feel their actions in Beit Shemesh are a productive use of time.

Mayor Bloch responded to Muntag, explaining, “There are thousands of students in institutions of this kind, who fall under the responsibility of the sender [Muntag] of the query, who is in charge of planning and construction, according to which thousands of students will have to be homeless.

“We will not continue to act as we have done so far, but regarding the past, we will try to help as far as legally possible for these places and, if necessary, to provide alternative institutions for the city’s students. All of them are sons and daughters of Beit Shemesh and cannot be exploited for [coalition] negotiations or intimidation.”