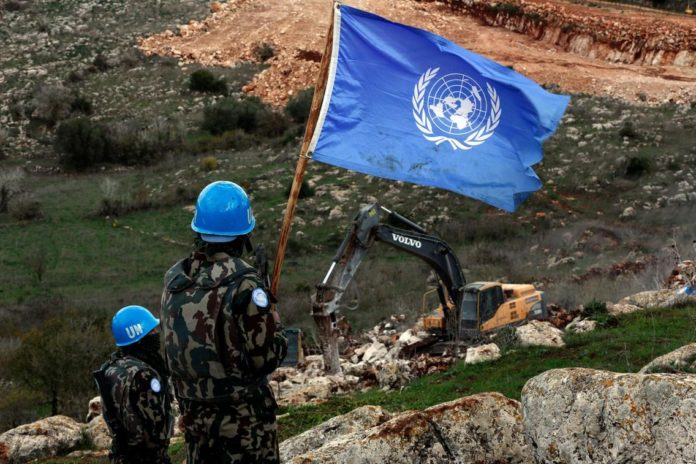 As Israeli excavators dug into the rocky hills along the frontier with a Lebanese village, a crowd of young Lebanese men gathered to watch.

The mood was light as the crowd observed what Israel says is a military operation — dubbed “Northern Shield” — aimed at destroying attack tunnels built by the Lebanese Hezbollah militia. The young men posed for selfies, with the Israeli crew in the background, as they burned fires and brewed tea to keep warm.

But Lebanese soldiers were visibly on high alert, deploying to new camouflaged posts behind sandbags and inside abandoned homes. About two dozen U.N. peacekeepers stood in a long line, just ahead of the blue line demarcating the frontier between the two countries technically still at war.

The scene highlights the palpable anxiety that any misstep could lead to a conflagration between Israel and Lebanon that no one seems to want.

Underscoring such jitters, shadowy figures appearing across the misty hills of the border village of Mays al-Jabal last weekend sparked panic, and Israeli soldiers fired in the air to warn a Lebanese military intelligence patrol, according to Lebanese reports. Israel said it fired at Hezbollah members who came to the site to dismantle sensors installed to detect tunnels.

Israel’s tunnel search comes at a time when the civil war in neighboring Syria seems to be winding down. Hezbollah had sent hundreds of troops to Syria in 2013 to fight alongside the forces of Syrian President Bashar Assad. With Assad’s forces emerging victorious, attention now seems to be returning to the tense Israel-Lebanon border.

Israel said its troops have discovered at least three tunnels along the frontier — a tactic used by Hezbollah in previous wars — and called on the international community to impose new sanctions on Hezbollah.

The militant group, which fought a bruising but inconclusive war with Israel in 2006, has not commented on the Israeli operation or statements.

Lebanese Prime Minister-designate Saad Hariri said Thursday that neither Israel nor Lebanon wanted to go to war, but noted that Israel violates Lebanese airspace and international waters on a regular basis.

He said the Lebanese army “will deal with this issue” after receiving a full report from the U.N peacekeeping force, but did not elaborate.

The peacekeeping force, known as UNIFIL, has confirmed the presence of tunnels and said it is working with both sides to address the situation in line with U.N. Security Council resolutions.

In southern Lebanon on Thursday, Lebanese army soldiers observed the frontier in Mays al-Jabal, taking photos of their Israeli counterparts operating only a few meters (yards) away. At times, the Lebanese soldiers asked the young men to move back, away from the frontier.

Lebanese homes and farms are nestled at the bottom of the hill where the operations run from daybreak until sundown. No civilian Israeli homes visible from that tense border.

Ali Jaber, a 21-year-old resident of Mays al-Jabal, said he believes that Hezbollah is more popular after the Syria war, and that this is the reason Israel is now turning to it. “But whoever puts up a shield and is hiding and making fortifications must be scared,” he said.

Hussein Melhem, a 19-year old electrician from the village, came to watch. His cheeks ruddy on a cold but clear day, he covered his head with a tight hood. He alleged that Israel is trying to change the border.

“If they could occupy all of this, they would,” he said, in an apparent reference to Israel’s 18-year military occupation of southern Lebanon which ended in 2000. “But the resistance will prevent them.”

As a seven-year-old in 2006, Melhem and his family left Mays al-Jabal when Israel invaded. His village was badly damaged but has since largely recovered and he said he found their home intact.

It is hard to forget about war in the villages and towns along the frontier. Pictures of Hezbollah fighters who died in the 2006 war, as well as the one raging in neighboring Syria, known locally as the “Sacred Defense,” are everywhere. Posts on town squares boast of defeating Israel or urge the locals to “know their enemy.”

During the Syrian civil war, Israel has frequently carried out airstrikes in Syria against Iranian-allied forces, particularly Hezbollah. Israel says it aims to prevent sophisticated weaponry from reaching Hezbollah, which it considers its most pressing security concern.

In Lebanon, Israeli Prime Minister Benjamin Netanyahu’s warnings have raised suspicions that he is also using the tunnel operation as a diplomatic pressure card.

Netanyahu has called for more sanctions against Hezbollah. In a visit to the frontier earlier this week, he warned that if Hezbollah tries to disrupt the search for tunnels, “it will be hit in a way it cannot even imagine.”

In Israel, some newspaper commentators have been critical of the U.N. peacekeeping force, whose mandate Israel and the United States have unsuccessfully attempted to expand to include “intervention and deterrence.”

About 20 kilometers (12 miles) to the north from Mays al-Jabal, Israeli soldiers are also operating along another frontier to uncover what they suspect is a tunnel location.

There, a high concrete wall separates them from the Lebanese village of Kfar Kela. Red-roofed Israeli homes on a hill overlook the diggers, who had cleared peach trees to make room for their work. Lebanese residences, some of them luxury summer homes, sat atop hills hundreds of meters from the wall.

U.N. peacekeepers and Lebanese army separately patrol the area. Israel began building the wall in 2012, and this section was completed weeks ago. While graffiti covers the older slabs of concrete, water has collected under the newer segment of the wall.

A U.N. peacekeeping force was working to clear the water after Lebanese residents complained it comes from irrigation drainage from the other side.