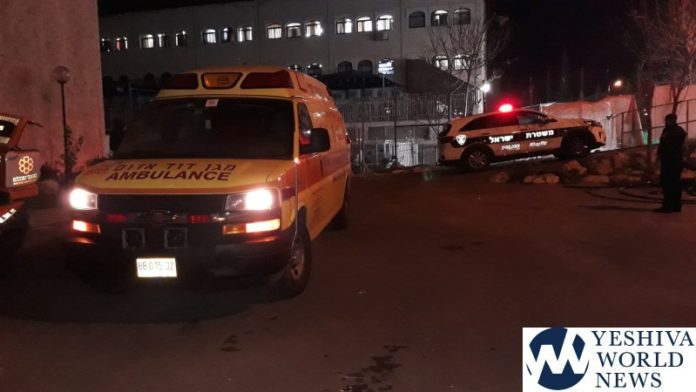 A thirteen-and-a-half-year-old boy who drowned in a pool in Jerusalem ten days ago R”L passed away on Shabbos. He arrived at Hadassah Ein Kerem hoospital in critical condition and was on respirators and sedated until he passed away. A hospital spokesperson said: “The staff of the hospital did everything they could in order to help save the boy. We share the pain of the loss and mourn together with the family.”

A 38-year-old man was shot and killed on Motzei Shabbos near Highway 5614 in the Sahron region. Police have open an investigation into the incident and as of yet have not declared a motive.

A 19-year-old driver was caught on Friday night traveling at 199 kilometers (almost 120 miles) per hour on Highway 20 in Tel Aviv. The permitted speed is 90 kilometers (55 miles) per hour.  The driver was detained for questioning and then released. His driver’s license was suspended for 30 days and he has subpoenaed to a traffic court.

On Friday, terrorists fired a rocket from within Gaza at Israel just before midnight. The rocket fell in an open field near Sha’ar HaNegev. There were no injuries and no damage was reported. IDF helicopters retaliated by firing on and destroying a Hamas outpost in the southern part of the strip.

One terrorist was killed on Friday while participating in the weekly violent protests along the gaza border. The terrorist had fired on IDF soldiers patrolling the border. The Gaza Health Ministry reported that a number of protesters were injured. Protesters threw rocks, improvised explosive devices, and hand grenades at IDF soldiers who used crowd-dispersing ammunition against the protesters.

Prime Minister Binyamin Netanyahu and newly elected President of Brazil Jair Messias Bolsonaro met in Rio de Janeiro and agreed on increased cooperation between Israel and Brazil in the fields of economics, agriculture, technology in addition to others. Bolsonaro promised that he would visit Israel before March in order to thank Netanyahu for traveling to his inauguration ceremony in Rio.

The father of The Lone Soldier Movement in Israel and winner of the Israel Prize Tzvika Levy was niftar on Shabbos. He had been suffering from muscular dystrophy.

Famed Israeli soccer player Shaya Glazer passed away on his 91st birthday on Shabbos. Glazer played most of his career for Maccabi Tel Aviv and was considered among Israel’s all-time best players.

A 40-year-old man was killed and another two people were lightly injured in a car accident that took place on Highway 232 between Be’eri and Reim in Israel’s south.

A business in Nahariya was burned down after it was set on fire according to reports. Two other stores were damaged in the blaze. Police and Fire Department officials are investigating.

A 48-year-old man was stabbed on Friday night and was in moderate condition. Police have said that they have taken into custody the man’s wife who is suspected of stabbing the man.

A 30-year-old man was moderately injured after his jeep flipped over near the B’sor river and hiking trail.

He was transported by emergency helicopter to Soroka hospital in Beer Sheva where he was treated for chest and head injuries.