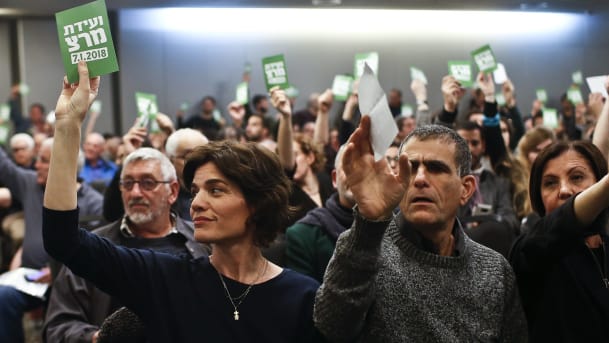 The Meretz party urgently asked the chairman of the Central Elections Committee, Judge Chanan Meltzer, to approve the party’s publications on billboards in Bnei Brak, including the picture of party chairman Tamar Zandberg. The norm in Bnei Brak is that adverts do not display women.

The municipality of Bnei Brak, note in their response to the request that the petition is unnecessary because it is a request to erect signs in two months, even before the city has addressed the matter.

According to the municipality, Meretz’s request to the Central Elections Committee preceded any discussion by the committee. At the same time, the petition of the party was submitted on January 22, 2019, during the evening hours, and the very next morning, the petition was filed by publishing the matter in the media, presumably towards accumulating political capital.

In addition, the municipality explains it acts to preserve the value of modesty, which is a basic and central value for the Torah observant community while the municipality does not discriminate against women. The city policy is based on modesty being a lofty value and not as an insult to someone.

In addition, it was claimed that some of the proposals that have been publicized which were attached to the petition of the Meretz party dealt with the agenda of opening businesses on Shabbos, activating public transportation and encouraging Chilul Shabbos, which is a very difficult issue in the chareidi world. Using terms of others being second class citizens is advertising merely in an attempt to discredit the Torah-observant sector, and to claim religious coercion, thereby creating a distorted incitement against the public.

The municipality’s representatives stressed in their reply that the petition was intended to provoke a provocation, deepen the rift in Israeli society and issue a “bad reputation” to the traditionally traditional public. It was also said that the presentation was a misrepresentation of discrimination on the part of the municipality, when the proceedings of filing an urgent petition was only 12 hours after submission of the request to the municipality regarding signs, and even before receiving the municipality’s request for publication of the party, The central elections are a request to publish signs in another two months, a few days before the election day, thus creating the impression that an urgent decision is required in the petition.