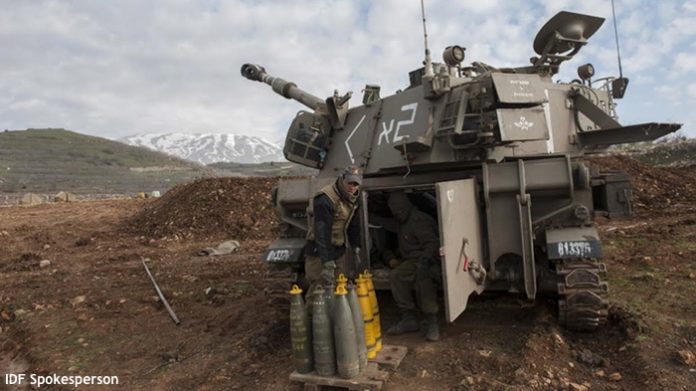 Iran has set up an observation post to permit monitoring activities and actions of IDF soldiers in the Golan Heights as tensions between the countries increase. According to the Walla News report, quoting foreign media agencies, the post is set up by Iranians and members of Hezbollah who are assisting, only a short few kilometers from the Israeli-Syrian border.

A few days ago, according to foreign reports, IDF tanks attacked targets in the Kunetra area near Jibta al-Khashab in a place called al-Shahar, a few kilometers from the Israeli-Syrian border in the Golan Heights. According to some report, Hezbollah operatives and Iranian forces set up a surveillance site to monitor IDF forces operating in the Golan Heights. This is hostile activity within range, a few short kilometers from the border fence, in complete contradiction to the Russian commitment to distance Iranian and Hezbollah activities from Israel.

The reports cite the Iranians are capable of monitoring the IDF on the Golan, seeking out and monitoring weak spots in preparation for the eventuality of a future attack, once again, quoting unnamed foreign reports. The reports add the IDF has destroyed the means used to monitor the IDF activities, and if those reports are accurate, it is an IDF nightmare as it is connected to the complex situation vis-à-vis the Golan and Syria, occurring very close to the security fence. The Walla report adds this reality and accompanying concerns will be raised next week in talks between Prime Minister Binyamin Netanyahu and Russian President Vladimir Putin. Russia is supposed to ensure such activities do not occur within 80 kilometers (48 miles) of the border to Israel.

The IDF has refused to comment on the various media reports.

In January 2015, senior Iranian and Hezbollah officials visited the Syrian Golan Heights as part of preparations for an attack against Israel. According to foreign reports, Israel attacked the convoy in which Iranians were killed and Jihad Mughniyeh, a senior commander in the Hezbollah organization, who is also the son of Imad Mughniyeh. Ten days later, Hezbollah’s Kornet anti-tank missile attacked the Tzabar Battalion of the Givati Brigade, killing a company commander and a fighter, and wounding seven other IDF soldiers.