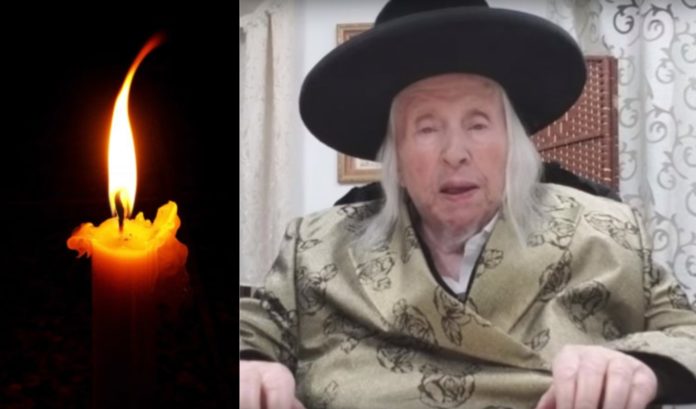 YWN regrets to inform you of the Petirah of the Kaliver Rebbe of Eretz Yisrael. The Rebbe was niftar in his Yerushalayim home a short time ago after CPR was performed.

The rebbe grew weak of late, and rarely left his home for Tefilos or Tischen. On Sunday morning, he lost consciousness and MDA and United Hatzalah responded to his is home on Chana Street. Unfortunately, protracted CPR were unsuccessful in resuscitating him.

The elder of the admorim, the Kaliver Rebbe ZATZAL, was 96. He was the sixth generation from Rav Yitzchak Isaac of Kaliv ZY”A, a talmid of Reb Elimelech of Lizhensk Z”YA.

The Rebbe ZATZAL, Rav Menachem Mendel Taub, was born in Transylvania in 1923. After the Nazis Y”MS invaded Hungary, the rebbe, his brothers and other family members were sent to Auschwitz.

After the Holocaust he married his wife, Mrs. Chana Sara Shifra Taub A”H, who was engaged to her before the Holocaust. The Rebitzen was the daughter of the Admor Rabbi Pinchas Shapira of Kachnaya (קעכניא) ZY”A and he met her again in Sweden after the Holocaust.

In 1944, the Rebbe was put on a transport to Auschwitz by the Nazis, and arrived there three days before Shavuos. While in Auschwitz, he was experimented upon by Dr. Joseph Mengele Y”MSH, and, consequently, was unable to have children or grow facial hair. He was transferred from there to the Warsaw Ghetto and the Breslau concentration camp, and later to Bergen-Belsen. Six months after the war ended, he discovered that his wife had survived, and they were reunited in Sweden.

I received with great sadness the news of the passing of the Admor of Kaliv, זצ"ל, the '#Holocaust Admor' an inmate at Auschwitz who dedicated his life to the victims' memory. His work has particular resonance at present as we redouble our commitment to remember and never forget

In 5723, after immigrating to the Eretz Yisrael, the Rebbe established the center of the Kaliv Chassidim in Rishon L’Tzion. In the year 5740 he moved to Bnei Brak, where he established the Merkaz Kaliv on Chaggai Street and later on Aharonovich Street in the city.

In the year 5762, the Rebbe dedicated a new Beis Midrash in a spacious building in the Shikun Chabad area of Yerushalayim, where he built his apartment and lived his life.

Below is a message of the Kaliver Rebbe to President Trump, thanking him for his recent declaration that Jerusalem is the Capital of Israel.

The Kaliver Rebbe devoted his time to commemoration of the holocaust victims, and in this framework, he corrected the recitation of Shema Yisrael at the end of each tefilla in memory of those who perished.

During the last 70 years, since World War II, the Rebbe has traveled, spreading his story and the saying of Shema Yisrael to millions of Jews. He was active in Kiruv Rechokim and held regular shiurim and shmuessen for groups of professionals, including doctors and police officers. In addition, he directed a network of kollelim, an encyclopedia project, and several other undertakings of chassidus Kaliv.

The Rebbe authored and published Kol Menachem, a 13-volume work on the Torah and Yomim Tovim, along with several other works.

In March 2014 he participated in the annual conference of the Rabbinical Congress of Europe, which met in Budapest to commemorate the 70th anniversary of the destruction of Hungarian Jewry. He delivered an emotion-laden speech in Hebrew, and switched to English to direct remarks to US President Barack Obama and Russian president Vladimir Putin.

The Rebbe even established an encyclopedia of the Holocaust for the chareidi tzibur, after saying that they did not sufficiently immortalize the spiritual heroism of the Jews who gave their lives to observe mitzvos during the Holocaust.

The levaya of the Rebbe ZT”L will begin at 4:00PM from his beis medrash on Chana Street in the Shikun Chabad area of Jerusalem and then travel via the Belz Beis Medrash to Har Menuchos for Kvura in the area designated for prominent rabbonim.

“I express deep sorrow over the passing of Rabbi Menachem Mendel Taub, the Admor of Kaliv. The Hasidic admor survived the horrors of the Holocaust and dedicated himself to rebuilding the world of Torah in the State of Israel and among the Jewish diaspora. At the same time, he was tirelessly engaged in enshrining the memory of the Holocaust, especially the triumph of the impressive spirit in the ghettos and camps. The passing of the Admor of Kaliv close to Holocaust Martyrs’ and Heroes’ Remembrance Day strengthens our eternal commitment – to remember and not forget. May his memory be blessed.”

Following is Israel President Reuven Rivlin’s statement following the rebbe’s petirah:
“I received with deep sadness the news of the passing of the Admor of Kaliv, זצ”ל, the ‘Holocaust Admor’ who suffered terribly as an inmate at Auschwitz and dedicated his life to the memory of the victims, inspired by a true love of Israel.

“The Admor gave voice the spiritual heroism of Jews during the Holocaust and did all he could to honor the memory of its victims. His work has particular resonance at present as we redouble our commitment to remember and never to forget. Our condolences to his family and many pupils. May his memory be a blessing.”

Video below of The Kaliver Rebbe’s Message to President Barack Obama: