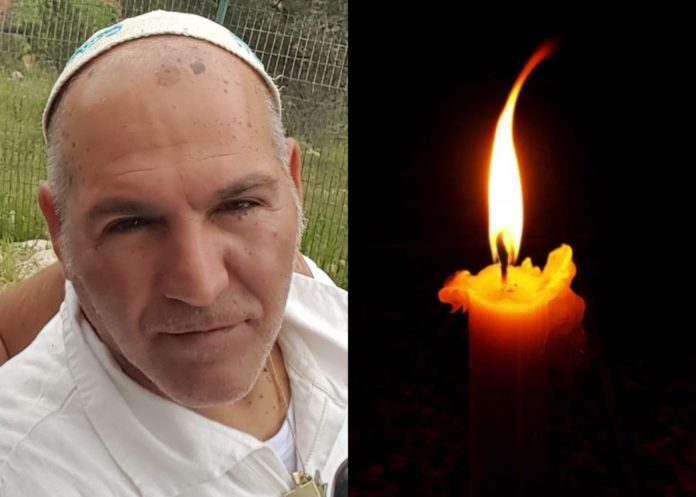 The Israeli civilian killed by terrorist rocket fired from Gaza has been identified. Moshe Agadi H”YD, a 58-year-old father of four, was killed early Sunday when a rocket landed next to his home in Ashkelon in the middle of the night. It is the first Israeli casualty from rocket fire since the 2014 war with Hamas.

Agadi suffered shrapnel wounds to his stomach and chest. He was taken to Barzilai Medical Center in Ashkelon, where doctors pronounced his death shortly after.

His funeral took place at 4:00PM Sunday at the New Ashkelon Cemetery. However, the public was asked NOT to attend the Levaya due to the security situation in southern Israel.

Typically, hundreds or thousands attend burials of terror victims, but a directive from the IDF’s Home Front Command prohibited any gatherings of more than 300 people in the range of Gaza rockets amid the barrage.

🔺430 rockets fired from Gaza at Israel. IDF has struck terror targets in Gaza, including:

Agdi was well-known vegetable merchant in the city, a man who neighbors report looked forward to Shabbos and attending Shul.

Shai Agdi, the brother of the deceased, in an interview with Galei Tzahal (Army Radio): “My brother Moshe knew how to respect every person. Love everyone and love people. Modest and innocent in his way. We do not know how to proceed from here. I feel helpless. If he was here, he would give us hope. Anyone who needed hope would have received it from him. He was happy with his lot. It is impossible to describe in words; we still do not digest what occurred.”

“Moshe sold vegetables in the market in Ashkelon, and many people knew him well. He assisted families and chased after mitzvos and did ‘hagba’ on the Sefer Torahg every Shabbos. We simply do not know how to continue from here,” he said. We are 14 brothers, most of us are in Ashkelon, my mother is 82. She has 14 children, over 100 grandchildren and great-grandchildren, I do not understand why a mother needs to feel lost at the end of her life, to lose a child”.

Dozens of #Israelis attended the funeral of Moshe Agadi H"YD, a 58-year-old father of four, who was killed early Sunday morning when a #Gaza rocket slammed into his home in #Ashkelon. The limited attendance — typically hundreds or thousands attend burials of terror victims — was in accordance with a directive from the #IDF’s Home Front Command, prohibiting any gatherings of more than 300 people in the range of Gaza rockets amid the barrage.

In the middle of a LIVE broadcast from a home hit by a rocket, this Israeli journalist runs for shelter as 4 more rockets are fired towards where he is reporting. Watch as the Iron Dome intercepts them LIVE on air. pic.twitter.com/t7iWL95Zfe

Since Shabbos, Hamas and Islamic Jihad terrorists have fired more than 450 rockets at Israeli communities, the IDF reports.

At least 3 Israelis have suffered significant inquiries: An 80-year-old woman was severely wounded by rocket fire, a 50-year-old man was moderately wounded by shrapnel and a teenage boy was mildly hurt as he ran for cover. Additionally, around 80 more people have been treated for shock, anxiety or other ‘minor’ injuries.

In retaliation, the IDF has hit back with tank shelling and air strikes at some 220 terror targets in Gaza. The IDF said 8 terrorists were killed. Targets struck included rocket launchers, training sites, terror tunnels, storage depots and warehouses of both the territory’s Hamas rulers and the smaller, Iranian-backed Islamic Jihad group.

The Palestinian Health Ministry said Israeli strikes had killed a pregnant woman and her 14-month-old daughter in their east Gaza City home. However, IDF spokesman Lt. Col. Jonathan Conricus said Sunday a detailed review had found that a Palestinian terrorist rocket had misfired and killed the two civilians. He said the Palestinians were “trying to sell a story that isn’t true.”

TERROR IN #ISRAEL: Inside a home in #Ashkelon where an #Israeli man was killed by one of more than 400 rockets fired by #Hamas #terrorists in #Gaza SEE FULL COVERAGE ON WWW.THEYESHIVAWORLD.COM [Link in InstaStory]

Conricus said Israel’s strikes hit a variety of “high-quality” terror sites, that included commanders’ homes in which terror activity was observed. He said he had no knowledge of civilians being harmed by Israeli fire. Conricus said Israel was deploying an armor brigade along the Gaza front, with tanks ready for offensive missions as needed.

Israeli Prime Minister Benjamin Netanyahu said Hamas was paying a “heavy price” for its rocket attacks against Israel and that it would be held accountable not only for its own terror actions but also for that of the Islamic Jihad, which operates under its jurisdiction in Gaza.

We have just targeted Hamas' Military Intelligence and General Security Offices located in a building in Gaza.

Hamas used this building to hide terror infrastructure while abusing its location in the heart of a residential neighborhood. pic.twitter.com/EH5qrsHXtF

Sirens wailed along the border region overnight warning of incoming attacks. School was cancelled in southern Israel Sunday and emergency protocol enacted. In Gaza, large explosions thundered across the blockaded enclave during the night as plumes of smoke rose into the air. One of the airstrikes hit a six-story commercial and residential building that housed the office of Turkey’s official Anadolu news agency. Foreign Minister Mevlut Cavusoglu called it a “new example of Israel’s unrestrained aggression.”

The Israeli military says its Iron Dome defense system intercepted more than 150 of the projectiles from Gaza, but several still managed to slip through. A rocket scored a direct hit on a residential home in the border town of Sderot.

Jonathan Rieck, director of the emergency room at Barzilai Medical Center in Ashkelon, said they had treated some 80 people, most from shock symptoms, but several with body wounds, including an elderly man who was in critical condition from head injuries.

In response to 250+ rockets fired from #Gaza at Israel, we struck a Hamas HQ. In this building, Hamas used to order terror attacks and used to transfer money, supplies & logistics for the sake of killing Israelis.

Emphasis on the "used to". We destroyed it. pic.twitter.com/Bh2zhCGzCF

Israel has vowed to hit back hard against both Hamas and Islamic Jihad, whom it suspects of triggering the current conflagration. But, as in similar previous rounds where it stopped short of a full-fledged war, the timing for a prolonged round of fighting is tricky for Israel.

The country marks Memorial Day and Independence Day this week, when masses head out to ceremonies at military cemeteries and then street parties across the country. The following week it is set to host the Eurovision song contest in which large groups of tourists are expected to arrive.

For Gazans, the violence comes ahead of the Muslim holy fasting month of Ramadan that begins Monday.

Pics Hamas published of its rocket launches. They blur the bottom. Why?

1. So we won't know where the launch site is
2. So you won't see that they’re firing from civilian homes in Gaza

We have 2 things to say:

1. We know where they’re firing from
2. The blur isn't that good pic.twitter.com/Wt3w9BFICV

Yaakov Amidror, a former Israeli national security adviser, said the source of the eruption of violence was Islamic Jihad militants in Gaza being pushed by their patrons in Tehran.

“This is the interest of the Iranians, that there will be another operation in Gaza that they will be free to continue what they are doing in Syria and Israel will be busy with and focusing on Gaza,” explained Amidror, currently a senior fellow at the Jerusalem Institute for Strategy and Security.

Islamic Jihad has threatened to fire longer range rockets toward Israel’s heartland, and in a video that also was seen as an implicit claim of responsibility, it showed archived footage of militants attaching warheads to rockets.

It threatened to shatter the shaky understandings recently reached though Egyptian mediators. Israel had agreed to expand a fishing zone off Gaza’s coast, increased imports into Gaza and allow the Gulf state of Qatar to deliver aid to cash-strapped Gaza. Militant leaders were in Cairo trying to reach a new cease-fire.

This home was hit by a rocket fired from #Gaza. As you read this, more rockets are being launched from Gaza targeting more Israeli homes like this one. pic.twitter.com/g1K9o74jEj

Wherever you are in the world, whether you are now going to sleep or just starting your day…you need to know that for the second day in a row, Israelis are waking up to rocket fire from Gaza. pic.twitter.com/8kxq0unhsZ

What would you do if a rocket exploded in YOUR child's elementary school?

Thankfully no child was in this school when a rocket exploded in the courtyard.

This is just one of 250+ rockets that were fired from Gaza at Israeli civilians today. pic.twitter.com/UPzZoPBwWt