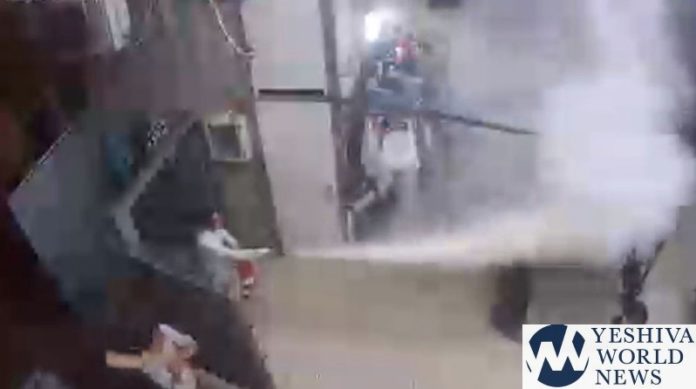 The group started their Shabbos with vandalism at the Antania Shul as well as the Machnovka Bais Medrash. Many other Batei Midrashim are now identifying the suspects as the same – all from security camera footage. They stole anything they could, broke things in all the buildings they entered, and assaulted many people.

The end of their vandalizm streak ended on Shavuos night when the gang spent three hours running around the streets, verbally abusing people, and using sticks to smash many objects. Being that it was Shavuos, local residents did not call police.

Eventually, the group arrived at the Dorog Bais Medrash, where a large crowd was learning and saying Tikun Lail Shavuos. They first began throwing water at the Chassidim, and then brazenly entered the building with large wooden sticks and began assaulting anyone they could. They threw heavy objects at anyone that came near them.

Afterward, the youths increased their activity, and even removed a fire extinguisher that was installed in the area, emptying its contents by spraying it indiscriminately in the beis medrash area, causing considerable damage.

Some of the young chassidim tried to oust the disruptive youths and was injured as a result of the throwing of stones by the rioters. Rescuers summoned to the site gave treatment to at least injured chassidim, some of whom refused to be evacuated to the hospital until after yomtov.

On motzei Yomtov, Sunday night, some of the youths returned to the beis medrash “to settle accounts” with the chassidim who struck them

Police have since arrested at least 5 of the attackers, and are searching for additional suspects. Sadly they all come from Chareidi homes (both Ashkenazim and Sephardim).

Meanwhile, on Tuesday afternoon it was learned that the same group of youths broke into another Baitei Midrashim in Bnei Brak, causing damage and stealing what they could find.

The security camera footage below was taken inside the “Antanya Beis Medrash” on Friday night (early Shabbos morning). The group attempted to smash the cameras, as well as soaked many ares of the SHul with lots of water.

Police are working to identify the group and connect the two.

Footage from the suspects inside the Machnovka building in Bnei Brak will be loaded shortly.