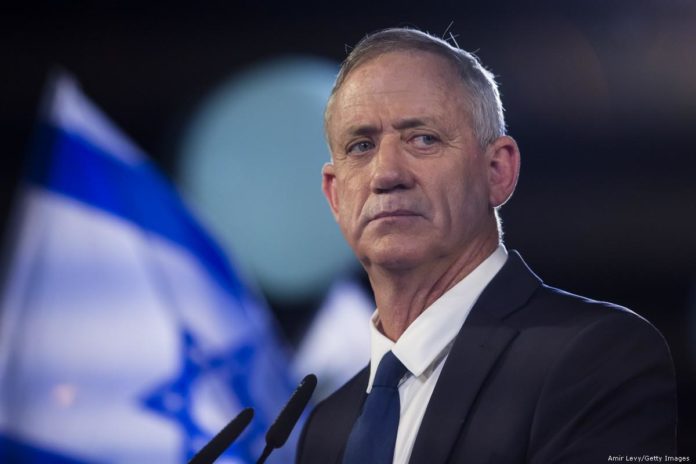 The chairman of the Blue and White party, MK Benny Gantz, used the Herzliya Conference to announce his solution to ongoing Hamas-based terrorism in Gaza.

“I know how to restore the deterrence. I plan to lead a new security policy against Gaza that is simple and determined”, stated Gantz in his address at the annual Herzliya Conference. “The security policy of Netanyahu during the past two years has led to the elimination of deterrence, and the last agreement, justifiably so, has led to the anger of residents”.

According to Gantz’s plan, the first stage is to restore deterrence: “We will crush them from the air, and we will return to targeted assassinations. We can increase the pressure on Hamas after we restore deterrence and achieve calm. The second stage is the political stage: We will initiate and initiate regional moves to develop the economic infrastructure and give hope to the citizens of the Gaza Strip. The humanitarian assistance will be carried out in an orderly and continuous manner, with the aspiration of the Palestinian Authority and through international organizations. And in any case – not in silver suitcases that leave no supervision on the money routes. It is important to say that we will not allow an arrangement that will not include the return of the bodies of Oron Shaul and Hadar Goldin and Abra Mengistu, who are still in Gaza”, Ganz said.

Regarding the attack in Syria, Gantz said: “Syria has become an unstable enemy state in which Iranian forces are based, and this requires Israel to act against weapons that are trickling into Hezbollah. The threat has increased, and it is important to maintain the capability, deterrence and ambiguity required”.

“We heard about the death of Solomon Taka, a member of the Ethiopian community in the Krayot, by a policeman who was on vacation. He apparently saw a fight, tried to intervene, felt his life was threatened and used his weapon”, Ganz said. “Naturally, such events raise feelings of anger among members of the Ethiopian community in general. The way to deal with this is based on three basic ideas: quick, transparent and genuine investigation, publication of all the results, a call to calm the spirits and embrace the Ethiopian community, which contributes greatly to the State of Israel. I tell us – we will research together; we will strive to verify together, and we will remain united”.

The former chief of staff also addressed threats from the Iranian side and said at the conference: “I will continue to work to strengthen the international coalition against Iran. I will do it carefully and responsibly, while maintaining a stubborn and determined policy and our credibility by not exaggerating words or making false promises. We must be prepared to act – and if I am asked to do so, I will not hesitate to use Israel’s forces. These are not just threats with an enemy. You have to do what you need when you need to. This approach is equally true and necessary in the Gaza Strip. Special operations are done when possible, wars take place when necessary, power is built between the systems. Of course, we try not to use it when other possibilities exist”.