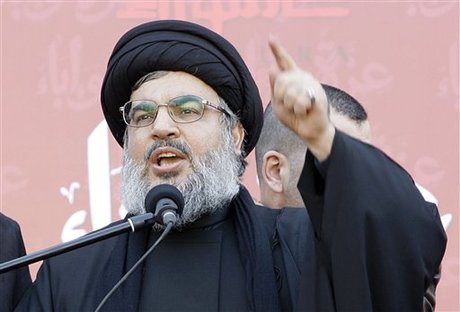 Hezbollah Chief Sheikh Hassan Nasrallah has once again issued a threat against Israel, this time on live radio, threatening to destroy IDF tanks and forces.

“I am telling Israeli that if we are attacked again, every area of South Lebanon will be like the battle in Bint Jbeil, but 500 times worse”, he stated.

Nasrallah broadcasted his message from his hidden bunker, exclaiming he is celebrating Hezbollah’s victory on the 13th anniversary of the Second Lebanon War.

“If Israel enters Lebanon, then all the commands and battalions will be eradicated” he threatened, adding, “You will witness the destruction of the tanks and Israeli forces via live broadcast”. He then went on to add, “The enemy is afraid to start a war against Lebanon. It does not occur thanks to the addresses and speeches. This is the result of strenuous work since 2006, with Hezbollah preparing itself, training its people and arming itself to be fully prepared and the best possible for confrontation with the enemy”.

In response, Prime Minister Binyamin Netanyahu stated, “We are not impressed by Nasrallah’s threats. He knows very well why he broadcasts them from the depths of his bunker.”