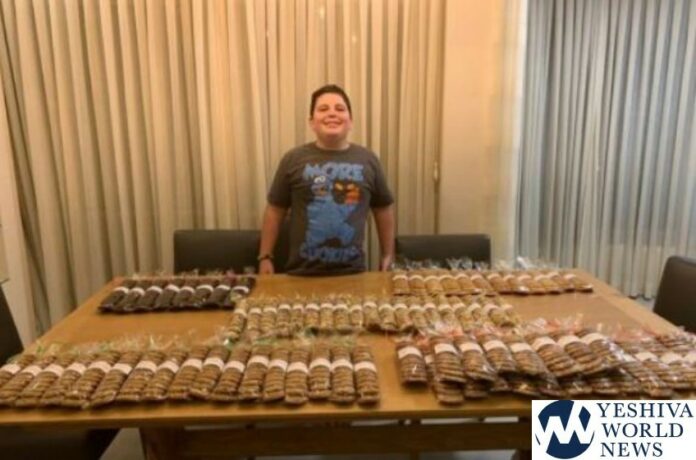 Gadi Schreiber of Modi’in decided to prepare 6000 cakes for his bar mitzvah, which he sold for NIS 13,0000. He used the money to establish a park for autistic children. The child made the unique decision ahead of his bar mitzvah.

His mother, Dr. Elisheva Schreiber, told Chareidim10 News “I am very proud of my son. Gadi is my third son, and the family has a tradition, that when each boy reaches bar mitzvah, he takes on a project for the kehilla.

“Gadi is fond of baking and cooking, and new helped him but most of the work rested on his shoulders.”

On the day he began putting on tefilin, the family gathered, a Shomer Shabbos family, gathering in a local facility for autistic children, ‘Akadem’, and there he put on tefilin for the first time. The check for the money raised was then handed to the director of the facility where the new special playground will hopefully be constructed.

Friends explain the young man had social media crazy with his cake sales, earning tens of thousands of likes in response to his project. Gadi was also approached for interviews in the media abroad.

The Schreibers made aliya from N. America 12 years ago to Modi’in. The Fundme program for Akadem Center’s special playground continues.