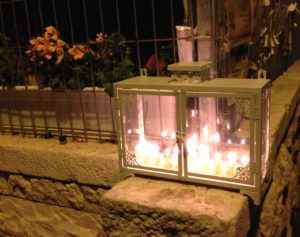 Go to Eretz Yisroel for Chanukah, and you will see Lucite and or glass boxes containing Menorahs for outside lightings. There is, however, a major, major halachic hurdle that must be overcome for this type of lighting to be valid.

But first, a slight introduction – then the hurdle.

In the time of Chazal, the minhag, of course, was to light the menorah outside in the front courtyard. It was to be lit by the entranceway of the front yard – facing the street. This was on account of the fact that the maximum Pirsumei Nissah is when we light the Chanukah lamps outside.

The hurdle is that we rule (See Shulchan Aruch OC 675:2) “hadlakah oseh Mitzvah” – the Mitzvah happens at the exact moment of lighting. This means that if all that is necessary for the Chanukah lamps to be lit is not present at the exact moment of the lighting then that lighting is invalid. Thus, if there was not enough oil in the lamps to last for 30 minutes and that oil was added later – the Mitzvah has not been fulfilled.

So what’s the hurdle?

If at the point of lighting, the glass door is open – and the wind would put out the Chanukah lamps within thirty minutes, the subsequent closing of the glass door will not help.

There is a type of glass container where the glass door is on the side – this averts the problem entirely. Another workaround is if one is careful to stand directly in front of the glass container in such a manner that his body entirely blocks off the wind. Since it is theoretically possible for him to stand there the entire thirty minutes – it would still fulfill the idea of “hadlaka oseh Mitzvah.”

When Jews started living among the gentiles, the minhag changed to light in the house on account of danger. Nowadays, the main pirsumei nissa, publicizing the miracle, is for one’s own family members. When did this change happen? The Meiri, who lives some 750 years ago, seems to indicate that the change had happened already during his time (See Shabbos 21b). The Ohr Zaruah (323:2), the Ravyah (Hilchos Chanukah 843) and the Baal HaIttur – all clearly state the change.

WHY DO WE NOT GO BACK?

The question arises as to why we do not go back to the original custom in situations where, baruch Hashem, there is no longer a physical danger. There are many neighborhoods in the United States such as in Kiryas Yoel, Lakewood, Boro Park, Williamsburg, Monsey and Far Rockaway where there are entire locations of just Jewish homes. Are there opinions that one should ideally be lighting outside in these neighborhoods?

The Aruch HaShulchan is of the opinion that we do not default to the original custom. He explains that the wind or rain would extinguish the menorah and Chazal did not go so far as to demand that we enclose the menorah in glass. In Eretz Yisrael, as mentioned earlier, many people do light outside in a glass-enclosed case.

Rav Shlomo Miller Shlita, one of the leading Poskim in North America, writes (Kuntrus Shoshanas Yisroel), however, that in the exile it has not been the custom to light at the front of one’s back yard next to the street – nor should one be changing this practice.

Rav Miller explains that, generally speaking, we do not have permission from the local governing authorities and municipalities to light in such a manner without adequate fire safety steps. This is especially true if everyone were to start lighting outside it is highly likely that some sort of fire might break out, heaven forbid. Therefore, Rav Miller concludes that it is incorrect to be stringent in this matter.

Essentially, we have a debate between Rav Elyashiv zt”l and l’havdil bain chaim l’chaim – Rav Shlomo Miller Shlita. It is interesting to note that in regard to burning Chometz on Erev Pesach, some people do it outside without fire safety supervision. This is still the case in many Jewish neighborhoods. On the other hand, there are neighborhoods where the fire department is quite strict about Erev Pesach burnings and require that it all be done in one supervised site.

This author has noticed that there are a number of individuals that have started the lighting outside again. It could be that they are following the ruling of Rav Elyashiv on the matter. The majority of people, however, follow the Aruch HaShulchan on the issue.