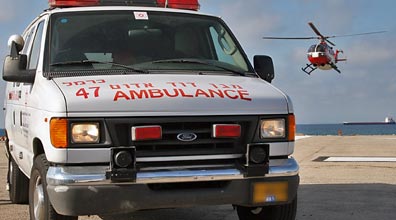 Magen David Adom is planning to establish a station in Modi’in Illit, explaining the city of 50,000 residents demands a station towards expediting emergency medical response and care. According to Kikar, in recent weeks, MDA regional director, Yitzchak Ben-Aaron met with Modi’in Illit rabbonim to discuss the planned station.

According to the report, the rabbonim shlita rejected the idea outright; stating such a station in the heart of the chareidi community is a breach of the standards maintained by the community. Askanim who were present during the meeting explained to Ben-Aaron the rabbonim are aware the presence of the MDA station will result in females assigned to the station walking around the community in unacceptable garb, violating the community tznius code.

Ben-Aaron stated that alternatively, the station would be established in neighboring Matisyahu, but the rav of the community also objected, Kikar reports, adding that on Tuesday, Hatzolah officials met to discuss MDA’s plan, seeking to prevent a MDA foothold in the community.

Hatzolah officials are quoted as saying that MDA intentionally interferes with their abilities to serve the tzibur and is therefore unwelcome.