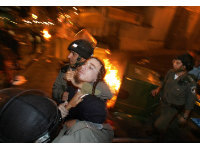 The Vaad L’maan Shabbos continued protest actions this week against the convenience stores which remain open on shabbos, operating in gas stations and elsewhere in the capital.

The vaad met on motzei shabbos and the chairman, Rabbi Yosef Rosenfeld stated that the new PEKP supermarket in the center of the city, on Darom Street [near Hillel Street] is another sign of the unacceptable growing trend of ignoring the shabbos in the capital. It appears another boycott is looming on the agenda.

The vaad is looking into ways to halt the continued trend of more and more stores operating on shabbos.

As usual, the protests against the city’s operation of Karta parking lot took place during the afternoon hours.