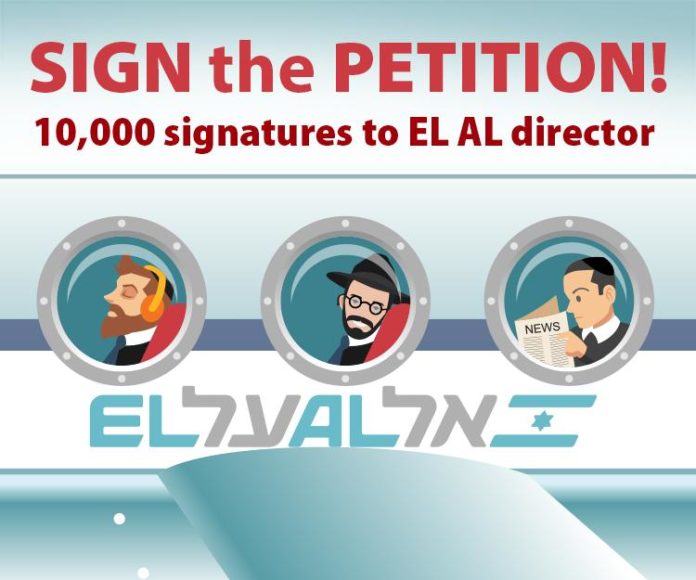 A group of frequent flying New Yorkers and Israelis have created a new petition aimed at EL AL airlines’ directors. The initiative was prompted by the most recent crisis involving the `Shabbos Flight’, but it addresses the long history of repeated incidents of disrespectful and insensitive treatment towards frum travelers. The latest was simply the straw that broke the camel’s back and moved them into action.

Many travelers have expressed solidarity and share the sentiment that they are frequently shocked, disappointed and hurt by condescending and disrespectful conduct of El AL staff.

The petition is not calling to boycott EL AL, but the organizers report that many people have already made up their minds to switch to other airlines. Instead, they are calling for people to first take a stand, let their voice be heard and be מקיים the mitzva of הוכח תוכיח את עמיתך.

As one campaign organizer we spoke with explained, “We feel that the right thing to do is to first allow people to express their grievances through this petition. We think this is the derech the Torah prescribes to follow in such cases.”

The petition will be sent in a few days along with 10,000 signatures to EL AL’s director, Gonen Usishkin, calling the EL AL management to seriously address this unfortunate phenomenon.

If you have witnessed disrespectful or condescending conduct by EL AL staff towards religious Jews you can sign the petition by clicking this link.