No, this is not a slogan nor another gimmick. It is actually true! You can really, truly master Hilchos Shabbos with the investment of a mere 24 hours. How can you be so sure? Because the program that empowers you to do just that has already been in existence for seven years with thousands of people having successfully mastered Hilchos Shabbos, B’ezras Hashem.

Until now, the program was only available in Yiddish, but now HaRav Yaakov Zev Smith shlita, well known maggid shiur for Irgun Shiurei Torah, has made this set of shiurim available for the English-speaking public. With Rav Smith’s clear delivery and ability to break down complex concepts into easy, bite-size pieces, virtually anyone is 24 hours away from knowing what to do in nearly every common scenario.

The MP3 series of 24 shiurim on Hilchos Shabbos with its accompanying workbook, offers every person a solid grasp of the most common Hilchos Shabbos scenarios and practical knowledge of what to do halacha l’maaseh!

In addition, after listening to the shiurim and doing the workbook exercises, not only will you have grasped the halachos, but you will also have mastered the underlying foundations and depth of the actual of reasoning behind the halachos, as it is well known, there is a profound value in not only knowing ‘what’ the halachos are, but ‘why’ they are so also.

Hundreds of hours were invested in deciding how to optimally organize the shiurim so that the listener will gain the clearest, most concise grasp of the halachos. The shiurim are delivered in strategic order with one concept seamlessly built upon another. Great thought was invested into insuring that whoever listens to the shiurim and utilizes the accompanying book will be able to B’ezras Hashem, understand and memorize the halachos.

Haskamos from Leading Poskim of Our Generation

The shiurim have the enthusiastic haskamos of over ten of the foremost poskim of our generation including HaGaonim, Harav Fishel Hershkowitz, zt”l, and ybl”ch, HaRav Shmuel Kamenetzky, shlita, Rosh Yeshiva of the Yeshiva of Philadelphia, HaRav Shlomo Miller, shlita, Rosh Kollel Avreichim of Toronto, Av Bais Din of Toronto and the Bais Horoah of Lakewood, Harav Yecheskel Roth, shlita, Av Beis Din Karlsberg and numerous other gedolei haposkim.

.At the helm of this groundbreaking halacha l’maaseh program is the well-known talmid chochom and mizakeh es harabim, HaRav Chaim Yaakov Unger, shlita, Rav of Kehal Toras Moshe of Boro Park. Rav Unger has made it his ultimate priority to enrich Klal Yisroel with knowledge of practical halacha in general and to improve the Shemiras Shabbos of Yidden the world over in particular.

The English version by Rav Yaakov Zev Smith was preceded by a Yiddish language version delivered by HaRav Tzvi Zev Berger, shlita, Dayan in the Bais Horaah of Karlsburg.

If you are seeking to transform your Shabbos from a day of doubt and lack of understanding of its halachos to a day of profound meaning and simcha call 718-506-9999 to have the English or Yiddish program delivered to your home and to be enriched with the gift of Shemiras Shabbos K’Hilchoso! 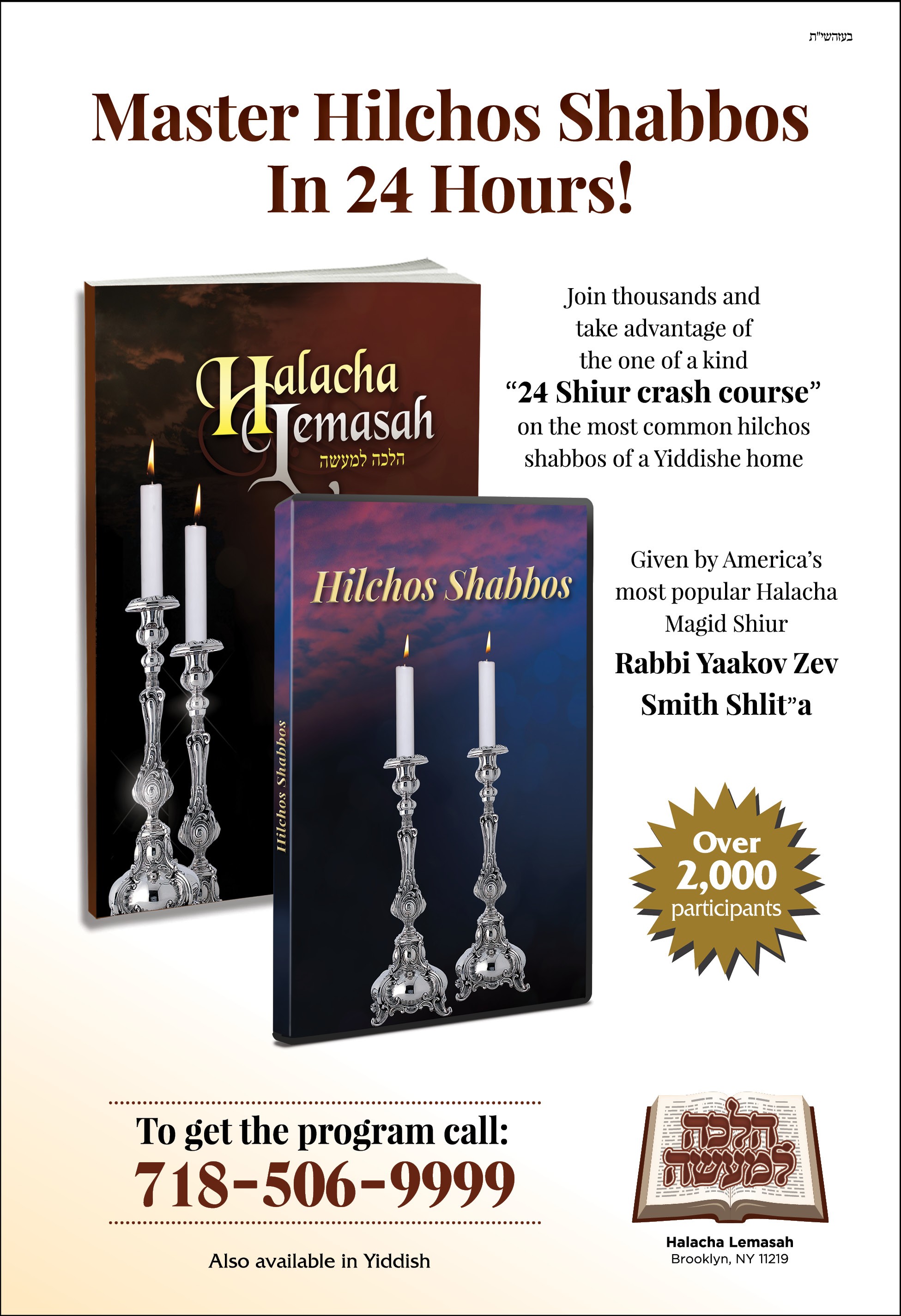