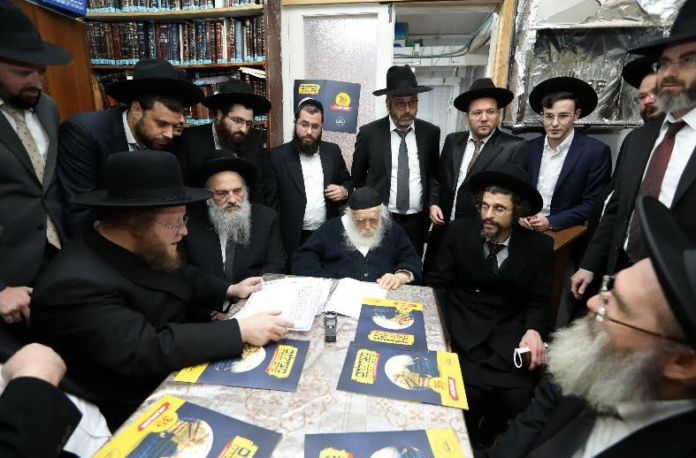 The Ateres Shlomo institutions are in final preparation for the mass fundraising events to be held tomorrow, Tuesday and Wednesday, Rosh Chodesh Adar I. As part of the fundraising campaign, Ateres Shlomo is expected to reach the target they have set for themselves – to manage to get to the $5 million mark, which will then be doubled by the matching system and get them to $10 million.

The managers of the Ateres Shlomo institutions have been working for a long time on the campaign, which is accompanied by the rare letter of Maran Sar HaTorah Harav Chaim Kanievsky, shlita, who bestows his brachos to all the donors and supporters of Ateres Shlomo that “all those who participate in the campaign will merit yeshuos gedolos to all their requests in a wondrous way.”

The sharp-eyed certainly noticed the exclusive conclusion of the hand-written letter of Maran: He writes that the success of the campaign is “for the life of me!”

At the preparatory meetings of the Ateres Shlomo campaign, the following story – which stands behind these exclusive words of the Sar HaTorah – was revealed. This was when the Rosh Yeshiva, Hagaon Harav Shalom Ber Sorotzkin, shlita, arrived at one of his frequent visits to the house of Maran (who, by the way, had instructed Harav Sorotzkin a while back that he could enter the house to seek his guidance at any hour of the day!). During this visit, which was held late at night in the house on Rashbam St. in Bnei Brak, the Rosh Yeshiva raised the tight situation of the Kollel network and he described to Maran the needs of the Kollel avreichim and their families, and the difficulty of paying them their regular stipend.

The Sar HaTorah, who carries the burden of the Ateres Shlomo institutions on his shoulders, listened attentively to the words of the Rosh Yeshiva, and then something shook his great heart, as he was exposed to the difficulty on the side of the Kollelim, and the great mesirus nefesh of the avreichim.

The eyes of Rav Chaim were suddenly overflowed with tears. Tears began to flow. A tear, another one and then another one.

Rav Chaim, who bears the burden of Ateres Shlomo on his heart, who is deeply attached to the Torah lishmah learned in the network, began to cry as he felt part of the distress of these avreichim, the crown of the Torah world.

This formative moment was the inaugural step of the “Save the Olam HaTorah” campaign. Maran has called for this emergency campaign, and it is no wonder that he defines this crucial campaign as “for the life of me,” and blesses the donors with his unique brachos.

This moving story did not leave any of the campaign staff apathetic, and they wanted to convey the story behind the rare words to the entire public, in an original and touching way. Moving words were composed to describe this historic moment, and they were incorporated into the familiar melody of a song that recently became very popular – “Nafshi.”

To make the song even more complete, rare and moving documentation from inside the home of Maran Sar HaTorah were also added, as well as documentation of his signing on the rare letter on behalf of the campaign. Unique scenes from the Ateres Shlomo Torah network were also incorporated in the video.

“There is no doubt,” Ateres Shlomo’s management says, “that the tears of Maran, shlita, will not go unanswered. They will touch the hearts of everyone who sees the footage, and will – b’siyata d’Shamya – help the campaign enable it to reach the mass success.”