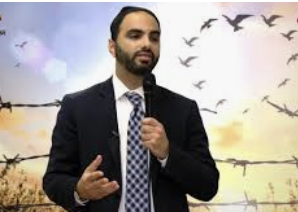 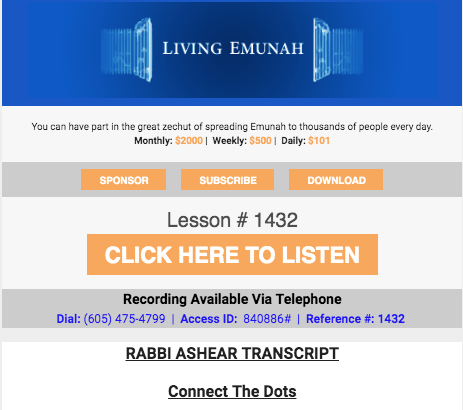 A man, who we’ll call Aharon, told me that three years ago he went through a very challenging time. He had a knee replacement surgery, he was diagnosed with cancer and he had a cardiac arrest, all within a short amount of time. Each one of those experiences alone, could put a person into a depression, but this man is happier than ever. What is his secret?

The day he was diagnosed, he was devastated. After receiving the phone call from the doctor, he left work, went home and cried like a baby. Nobody was around, so he didn’t tell anyone. He just sat there and cried. After some time, he decided to call his Rabbi for some chizuk. His Rabbi told him, “Don’t worry, you’re going to get through this. Mr. So-and-so was also diagnosed with a similar type of cancer a few years ago, and he’s doing very well now.” Aharon knew of that man, but hadn’t seen him in over fifty years. They had once worked together, during the summer, when they were fifteen years old and hadn’t seen each other since. Aharon felt a little bit of encouragement.

Right after that he went to pray Mincha. As he got out of the car, he bumped into that man- the one he hadn’t seen in fifty years. After they prayed, he went over to talk to him and got a lot of encouragement from him. Aharon thought to himself, how could it be? I haven’t seen him in so long and now, five minutes after the Rabbi mentions his name I see him? He felt that Hashem just spoke with him. He felt Hashem telling him that He’s with him in this trying time. And that gave him a whole new perspective.

When he told his wife and children about the diagnoses, he was much more upbeat. He said, “Don’t worry, Hashem is with us.” This experience enabled him to connect the dots to so many other times in his life when he experienced a clear hashgachat Hashem without realizing it. And since then, he lives his life with Hashem daily, talking to Him all the time, and he has experienced miracles.

His cardiac arrest took place on a Monday morning at 9:00 am. At that time of day, he’s usually alone somewhere. But on that day, he had a meeting scheduled and the other party demanded that it be at 9:00 sharp. The moment he walked into his building, he collapsed. Hatzalah was called and two of its members “happened” to be together, right down the block. They also “happened” to be his friends. 911 was also called and they ended up coming with a piece of equipment, which Hatzalah did not have, that was vital into saving Aharon. His two friends immediately started working on him when they got to the scene. They tried for six long minutes to get a pulse, without success. When the 911 ambulance arrived, their paramedics took over. They worked on Aharon for another fifteen minutes, and they couldn’t get a pulse either. They then pronounced him deceased and covered him with a sheet. Aharon’s two friends from Hatzalah were standing there, saying, “No, we can’t give up. What are we going to tell his family? We have to try harder.” So after already twenty-one minutes without a pulse, they began working on him again. They did everything possible and finally, fifteen minutes later, they got a faint pulse, enough to be able to rush him to the hospital.

Sometime after that, a doctor came out and told the family, Aharon will probably not make it through the night and, even if he does, he wouldn’t be able to determine the extent of his brain damage for a few weeks. Normally, if a person is without a pulse for even eight minutes, it could cause irreparable brain damage. Aharon was out for thirty-six minutes. The doctor also said, “If somehow he does survive, he’ll need extensive rehabilitation for months.” Baruch Hashem, Aharon was out of the hospital one week later with no brain damage and, by the next day, he was already back to driving his car.

It was a miraculous recovery, but it gets even better. A few days later, Aharon was nervously traveling to the city to start his chemotherapy treatments. He wished, somehow, he could avoid it, but he knew he had no choice. After some testing, the doctor told him, “We can’t do chemo on you now, your heart is too weak. We’re going to have to try something else.” They gave him a medication called Lupron and Baruch Hashem, Aharon has responded so well to it. Now, three years later, it has done wonders for him and he experienced no side effects at all. He realized, even his heart attack was a gift from Hashem. It was the catalyst for his successful and easy treatments.

Aharon now appreciates every breath of his life. He can’t wait to go to shul each day and pray to Hashem. He gets to shul early; he concentrates on every word; he values his private time with Hashem immensely. He concluded, “I hope other people will learn from my experience to appreciate their lives, to appreciate Hashem, to take notice of Hashem’s involvement in their lives and to utilize every day He gives them to its fullest.”