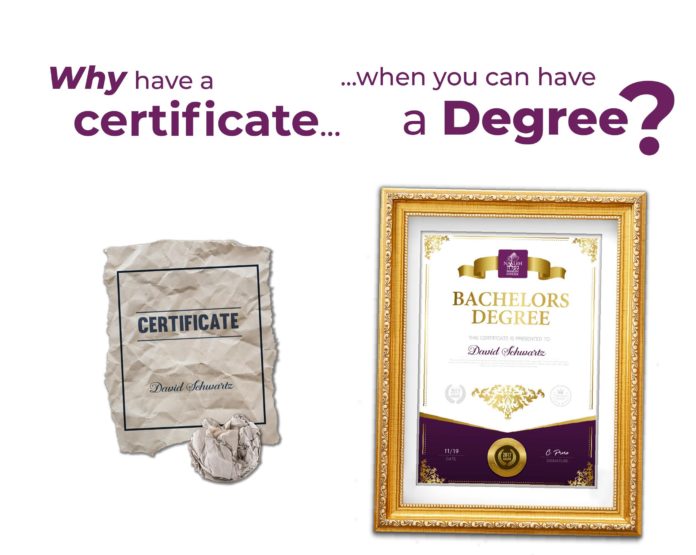 When thinking about your education and career, it can sometimes be confusing trying to figure out which path to take.  For example, you might be trying to decide between getting a certificate or getting a degree. There are a lot of factors to consider when making a decision like this.  Time, money, and schedule are just a few. What if I told you that you could get a bachelor’s degree in Computer Information the same amount of time and for the same cost as getting an IT certificate in the same field?  Oh wait, it actually gets better than that. You can do it on your own schedule too! Yes, exactly- you would jump at the opportunity!

According to CNN Business, a much higher percentage of jobs are going to candidates with a college degree.  “College grads are also more likely to get “good jobs,” which Georgetown defines as paying more than $53,000 a year. An earlier study found that 2.8 million of these jobs went to those with bachelor’s degrees between 2010 and 2014, while 152,000 went to those with associate’s degrees or some college courses. Those with only high school diplomas lost 39,000 of these positions.”  Don’t you want a slice of the pie?

From what we’ve read it seems clear that having a degree is much more valuable than a certificate alone. Remember a few minutes ago, I told you that you could get a bachelor’s degree in the same amount of time and for the same cost as getting a certificate?  It’s an opportunity you definitely should not pass up. Naaleh College offers computer degrees for as little as $6,000 that you complete in only 18 months!

It’s time to put your resume at the top of the pile. Head over to www.naalehcollege.edu and get started today!