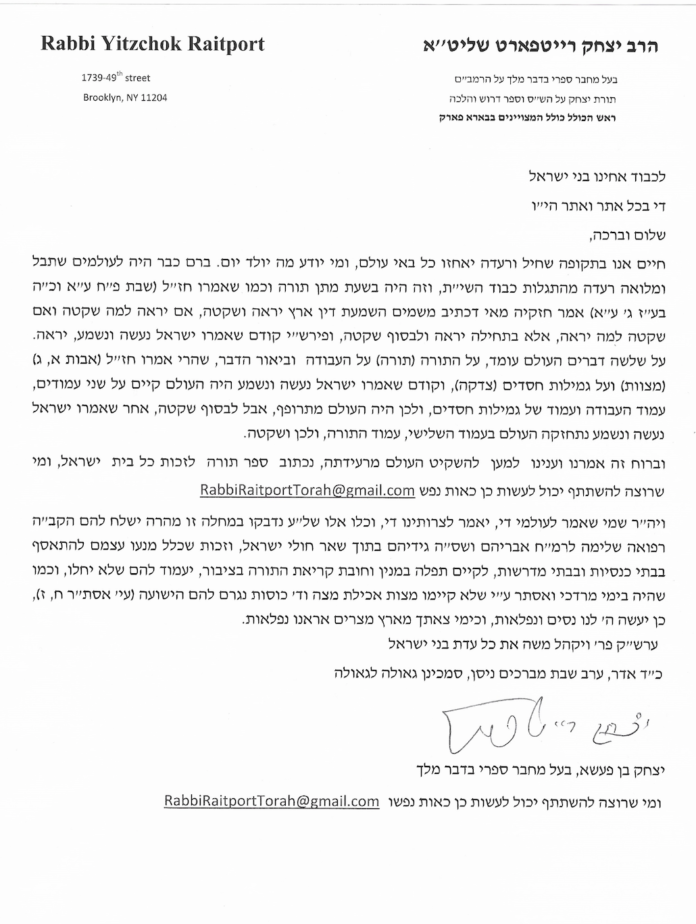 Rav Yitzchok Raitport is a renowned Tzaddik and Talmid Chochom who lives in the heart of Boro Park.  He runs a Kollel Metzuyanim, has published over 37 seforim, and has funded over 180 Mikvaos across the world .  This past week he launched a project in which he invites everyone to participate that is based upon a fascinating pshat in Rashi on meseches Avodah Zarah.

What follows is a translation of the adjacent letter.

To Acheinu Bnei Yisroel in all Parts of the World,Shalom uVracha! We live in times where fear and trepidation have seized everyone in the world.  Who knows what any day will bring?  However, Chazal tell us (Shabbos 88a and Avodah Zarah 3a)  that this once did happen in history, where the entire earth and all in it shook when the Glory of Hashem Yisbarach was revealed.  This was during Matan TorahChizkiya said, What is the meaning of that which is written (Tehillim 76:9):  “מִשָּׁמַיִם הִשְׁמַ֣עְתָּ דִּ֑ין אֶ֖רֶץ יָֽרְאָ֣ה וְשָׁקָֽטָה: You caused sentence to be heard from heaven; the earth feared, and was silent..?  If the earth feared, why was it silent, and if it was silent, why did it fear? Rather, in the beginning it feared and afterward it was silent.  Rashi explains that the fear was prior to when Klal Yisroel said Naaseh v’Nishma. 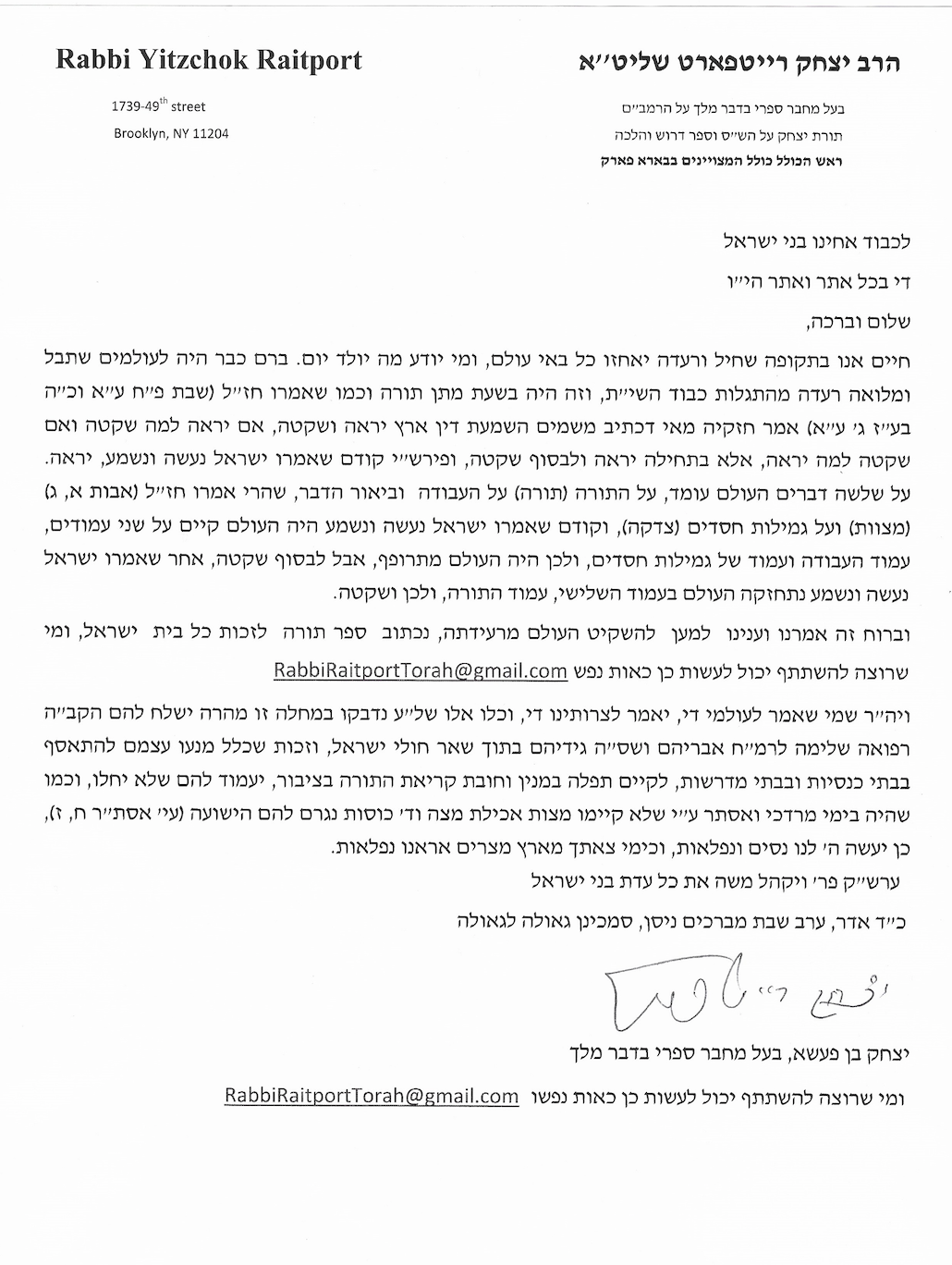 The explanation of the matter is based upon what Chazal say in Pirkei Avos 3:1 that the world stands on three things on the Torah on Avodah and on Gmilus Chasadim.  Before Klal Yisroel said the words Naaseh v’Nishma the world stood only on two things – Avodah and on Chessed.  That is why the world was shaking.  After Klal Yisroel said, Naaseh v’Nishma and the world became strengthened in the third pillar – the pillar of Torah – and then it calmed down.

In this spirit, we thought and responded that in order to help the world, we should take it upon ourselves to commission the writing of a Sefer Torah to bring merit to all of Klal Yisroel.

Whoever wishes to partake in this Mitzvah, should just email his or her name to the following email address [email protected]

May it be the Divine Will that He who said ‘To My World enough, shall say to our suffering enough and all those who have contracted this disease (lo aleinu) may the Hashem send them a complete recovery in their ramach eivarim and sh’sa gidim amongst the rest of Cholei Yisroel.  And in that which that Klal Yisroel is refraining from gathering in Shuls and Batei Midrashim to fulfill tefilah with a minyan and to fulfill the obligation of reading the Torah shall stand for them as a merit not to fall ill, as it was in the days of Mordechai and Esther – where they refrained from the Mitzvah of eating Matzah and drinking the four cups of wine – and that caused them a salvation (See Esther Rabbah 8:7).  May Hashem likewise make miracles and wondrous acts for us, as in the days when we left Mitzrayim – may we see miracles.

Erev Shabbos Kodesh, Parshas Vayakhel and Moshe gathered the entire nation of Israel, the 24 th of Adar – Erev Shabbos before we bentch Chodesh Nissan – placing one salvation next to anotherYitzchok ben Pesha.

Author of the Seforim Series BiDvar HaMelech and other works

Whoever wishes to partake in this Mitzvah, should email his or her name to the following email address [email protected] Rabbi Raitport is mezakeh you with this Mitzvah and you can give to any tzedakah any amount that you choose.