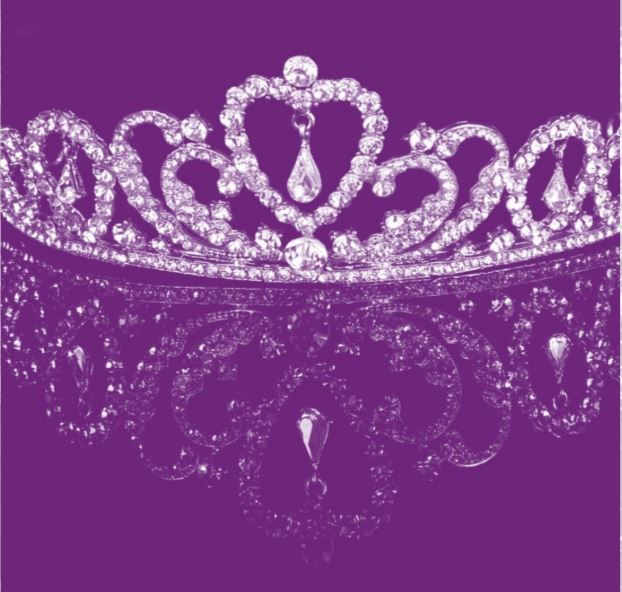 We are truly living in troubled times- but there is something we can do together to help bring a yeshua (salvation)! 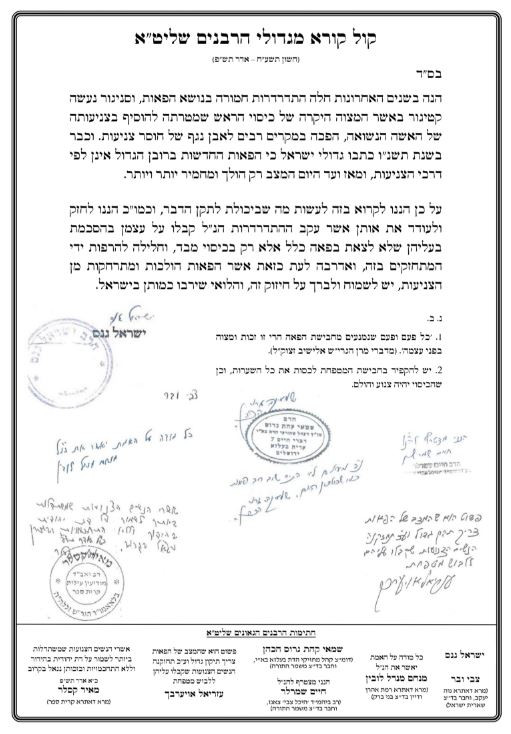 Corona is from the word coronation- when the virus is looked at under a microscope it appears to have a crown shape.

The mitzvah of Kisui Rosh (hair covering) is considered to be the “crown” of the married Jewish woman. This mitzvah has unfortunately become misunderstood in our generation.

A major part of the confusion is that women think that as long as their hair is physically covered they are perfectly fulfilling the mitzvah of Kisui Rosh. In truth, the primary purpose of the mitzvah is to raise a married woman’s level of modesty. The reason that the Torah prohibits a married woman to reveal her hair is because her hair is attractive to men. 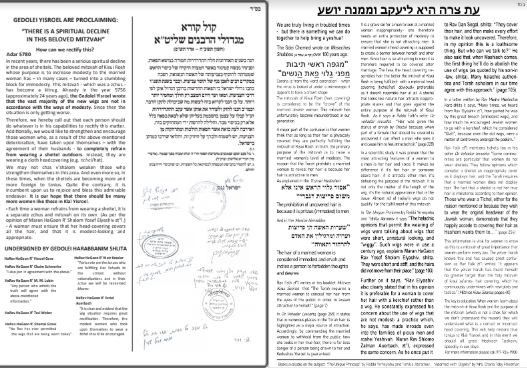 As explained in the Trumat Hadeshen:

Rav Falk zt”l writes in his booklet Mitzvos Kisui Saaros  that “The Torah requires a married women to conceal her hair from the eyes of the public in order to lessen attraction to herself.” (page 7)

In Oz Vehadar Levusha, (page 265) it states that in numerous places in the Torah hair is highlighted as a major source of attraction. Accordingly, by commanding the married woman to withhold from the public how she looks in her true hair, there is far less danger of a person being drawn to her and Kedushas Yisroel is guaranteed. 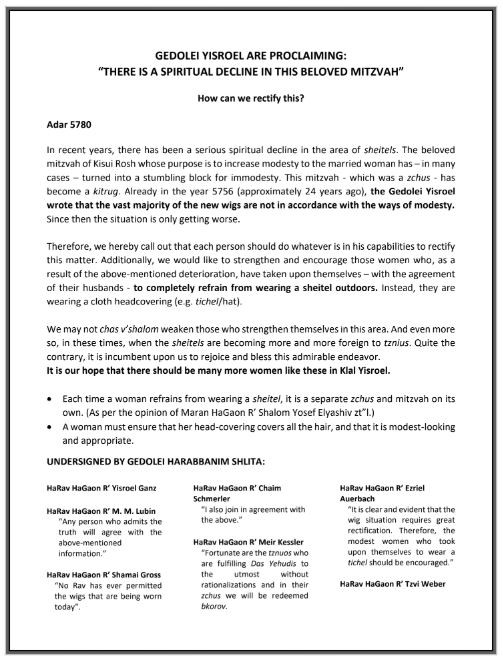 It is a grave sin for a man to look at a married woman inappropriately– she therefore needs an extra protection of modesty to ensure that she is not attracting men. A married woman’s head covering is supposed to create a barrier between herself and other men. Since hair is so attracting to men it is therefore required to be covered after marriage. The less the head covering resembles hair the better the mitzvah of Kisui Rosh is being fulfilled- with a material head covering (tichel/hat) obviously preferable as it doesn’t resemble hair at all. A sheitel that looks like natural hair attracts inappropriate stares and that goes against the entire purpose of the mitzvah of Kisui Rosh.  As it says in Rabbi Falk’s sefer Oz vehadar levusha:  “Hair was given the status of ervah by Chazal because when part of a female that should be covered is uncovered it can affect a man who sees it and cause him to feel attracted to it.” (page 228)

In a scientific study it was proven that the  most attracting features of a woman to
a man is her hair and voice. It makes no difference if it’s her hair or someone
else’s hair- if it attracts other men, it’s defeating the purpose of the mitzvah. It is not only the matter of the length of the wig, it’s the natural appearance that is the issue. Almost all of today’s wigs do not qualify  for the fulfillment of this mitzvah.

In The Unique Princess by Rabbi Yirmiyohu and Tehilla Abramov it says, “The halachic opinions that permit the wearing of wigs were talking about wigs that were short, unnatural looking, and “wiggy”. Such wigs were in use a century ago, explains Maran HaGaon Rav Yosef Sholom Elyashiv, shlita. They were short and stiff, and the hairs did not move from their place.” (page 103)

Further on it says, “Rav Elyashiv also clearly stated that in his opinion it is preferable for a woman to cover her hair with a kerchief rather than a wig. He constantly expressed his concern about the use of wigs that are not modest- a practice which, he says, has made inroads even into the families of pious men and roshei Yeshivah.  Maran Rav Shlomo Zalman Auerbach, zt”l, expressed the same concern. As he once put it to Rav Dan Segal, shlita: “They cover their hair, and then make every effort to make it look uncovered. Therefore, in my opinion this is a loathsome thing. But who can we talk to?” He also said that, when Mashiach comes, the first thing he’ll do is abolish the use of wigs (as quoted by his son-in-law, shlita). Many halachic authorities and Torah scholars in our time agree with this approach.” (page 105)

In a letter written by Rav Moshe Mordechai Karp shlita it says, “Many times, we heard from Rav Elyashiv zt”l, how pained he was by this great breach (immodest wigs), and how much he encouraged Jewish women to go with a kerchief, which he considered “Glatt”, because even the old wigs, were a matter of controversy amongst the poskim…”

Rav Falk zt”l mentions tichels too in his sefer Oz Vehadar levusha: “Some communities are particular that women do not wear sheitels. They follow opinions which consider a sheitel an inappropriate cover as it displays hair, and the Torah requires that a married woman does not display hair. The fact that a sheitel is not her true hair is immaterial according to their opinion. Those who wear a Tichel, either for the reason mentioned or because they wish to wear the original headwear of the Jewish woman, demonstrate that they happily accede to covering their hair as Hashem wants them to…” (page 254)

This information is vital for women to know as this is a mitzvah of great importance that women perform every day. The yetzer horah knows this and has caused great confusion as Rav Falk zt”l writes: “It appears that the yetzer horah has found himself
no greater target than the holy mitzvah of kisui sa’aros- hair covering, which he continuously undermines with new plots and tactics.” (Mitzvos Kisui Saaros, pages 40)

The key is education. When women  learn about the mitzvah of Kisui Rosh and the purpose of the mitzvah (which is not a chok for which we don’t understand the reason) they will understand what is a correct or incorrect head covering. This will help restore true tznius to Klal Yisroel and in this merit we should all greet Moshiach Tzidkeinu speedily in our days.

Books available on the topic:
“The Unique Princess” by Rabbi Yirmiyahu and Tehilla Abramov,
“Adorned with  Dignity” by Mrs. Chana Toby Friedman