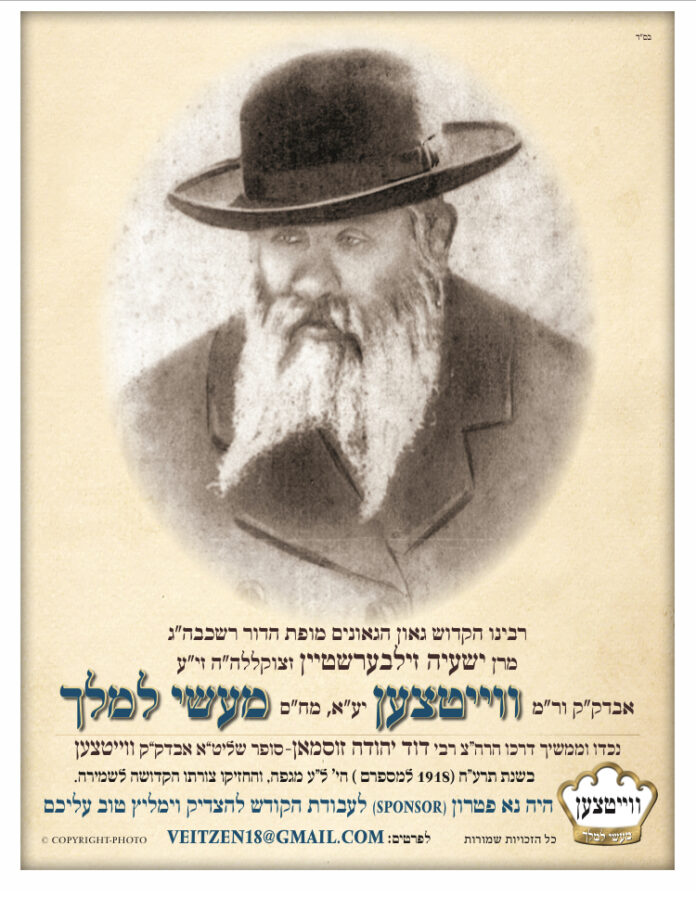 This Friday, (Parshas Mattos Masei), the 25th of Tammuz, 5780 (corresponding to July 17) marks the 90th yahrtzeit of one of the greatest Jewish Torah leaders in pre-war Europe: the Gaon, Tzaddik and Poel Yeshuos, Rebbe Yeshaya Silberstein Zt”l, author of the famous works Masei L’Melech – a multi-volume commentary on the Rambam.Known as the holy Masei L’Melech, His holiness and genius were famed well beyond the city of Veitzen (Vac), Hungary, where he served as Rav and Av Beis Din. He also headed the famous Yeshiva in Veitzen, and was recognized as one of the leaders of the Orthodox Hungarian Jewry.

His sefer, Masei L’Melech attests to his extraordinary scholarship, and in an uncharacteristic endorsement for the recently published “Teshuvos V’Chiddushei Masei L’Melech”, Hagaon R’ Chaim Kanievsky shlita, wrote “… he was famous among the giants of his generation, and it is apparent from his sefer that the entire Torah was spread out before him, I am sure those that support it and help will merit all blessings 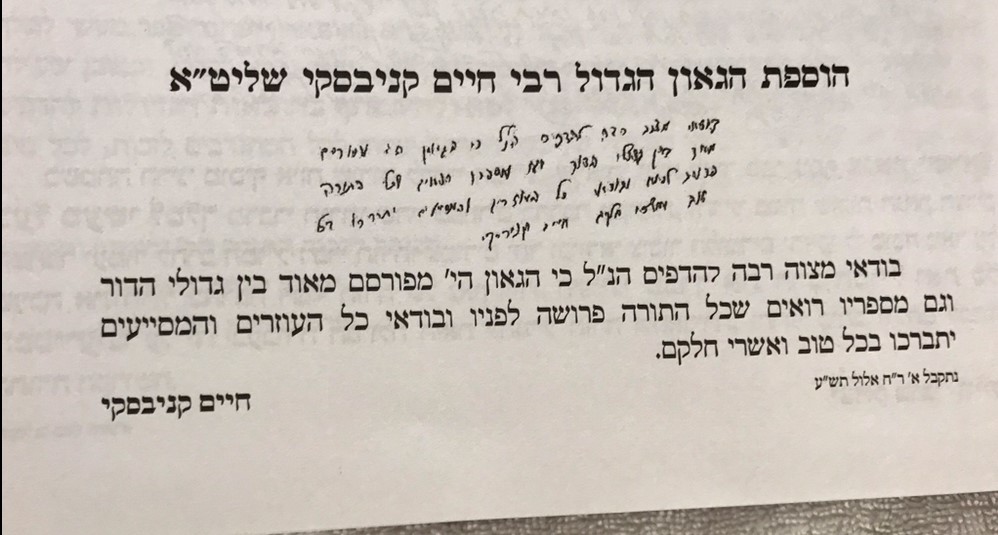 Likewise, great Chassidic leaders of his time, such as the Rebbe, Reb Yissocher Dov of Belz Zt”l attested to his unbelievable power of tefillah. His single-minded focus, internal consciousness of holiness and attachment to the spiritual realms were legendary. He was a guiding light to many an unfortunate Jew, as people of all affiliations flocked to his court, pouring out heart and soul. And he in turn, shouldered their burdens, offering solace and indeed salvations, as many of his brachos (blessings) came to fruition.

The stories of the miracles he wrought abound and were far reaching. So much so, that when the King of England became sick, he sent a delegation all the way to Hungary to the Masei L’Melech asking him to pray for him. He later sent a second delegation after he recovered to express his gratitude.

His passing did not mark the end of an era, on the contrary, people continued to flock to his kever, where he continued to affect yeshuos .
This was especially so on his yahrtzeit when his son, and successor, Rebbe Duvid Yehude Silberstein Zt”l, a gaon and tzaddik in his own right who perished in the Holocaust, led the tzibbur in tefillah and bakasha until his passing. 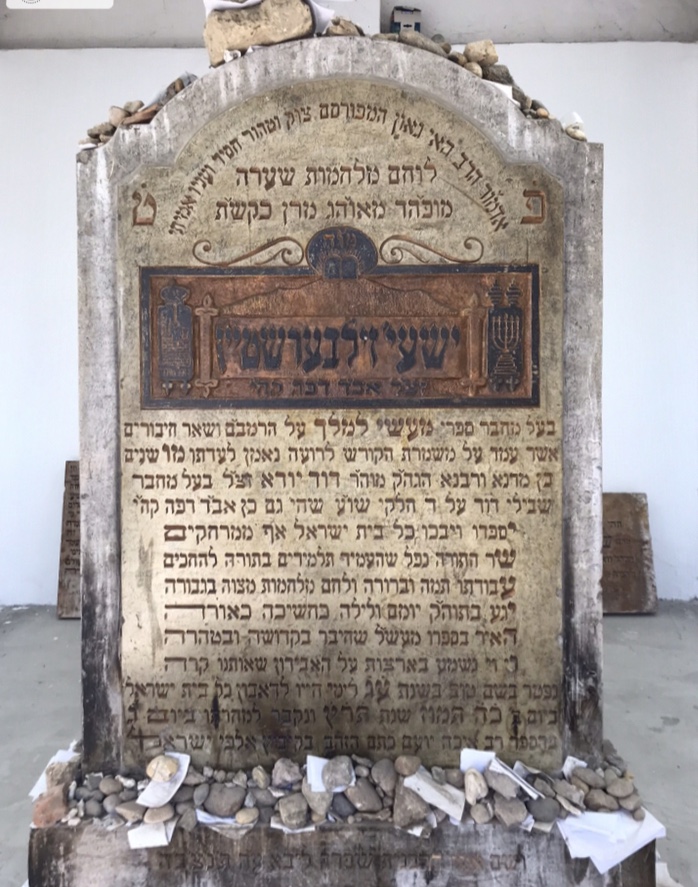 Following the inferno of World War II, the small number of Jews still living in Hungary continued visiting the Masei L’Melech’s kever finding it an anchor of consolation and support. In fact, Jewish tourists visiting kivrei tzaddikim in Europe are often directed to his kever as the single place to visit in time of need.

And still today, many attest to having witnessed tremendous yeshuos after having davened by the Tzion, and by making an effort to sponsor & support the holy work for the torah of the Tzaddik done by his descendant HaRav HaTzaddik R’ Duvid Yehude Zussman, Shlita, as the Masei L’Melech during his lifetime promised his blessings to those who help for his torah .

Some decades ago the elderly survivors of Veitzen, the veterans, and old timers who grew up on Rabbi Yeshaya’s legacy, made a decision to keep his memory alive, and to continue his legacy. It was on his yahrtzeit at the holy kever that they appointed his descendant, Rabbi Duvid Yehude Zussman shlita to lead as Veitzen Rebbe.
The current Rebbe of Veitzen is totally committed. He has devoted himself to the Torah of the Tzaddik and to chessed, in addition to spreading the wisdom and saintliness of this once famous tzaddik by having a Kolel of exceptional torah scholars in Jerusalem researching and studying his Torah, and publishing his enormously holy works. 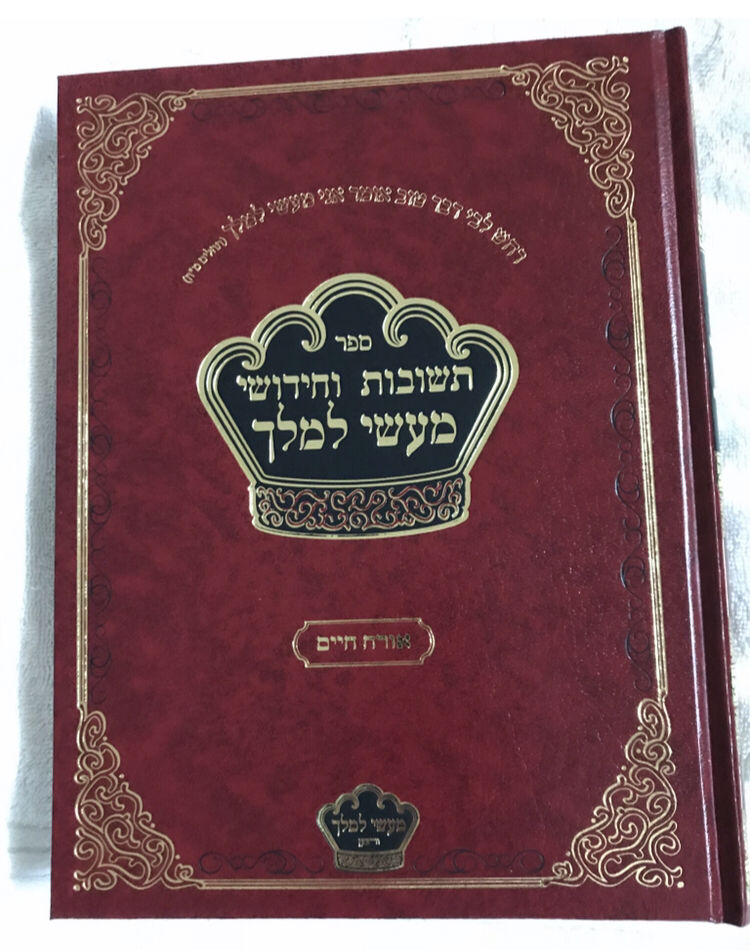 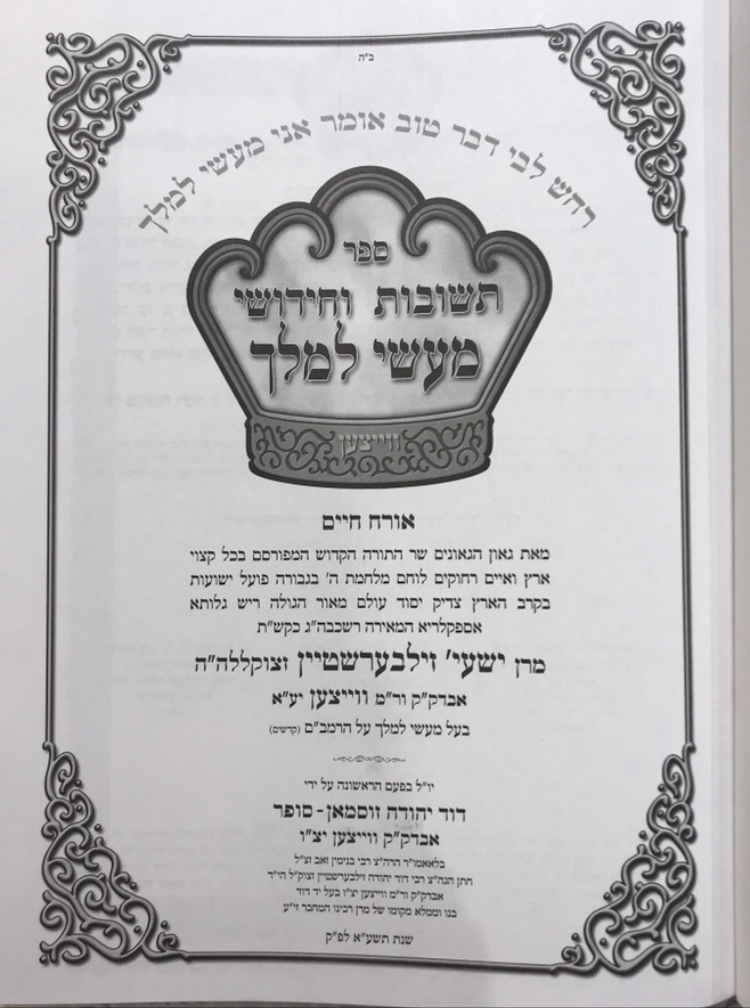 B”H over the last few years the impressive new sefer “Teshuvos V’Chiddushei Masei L’Melech” has been newly published, and many more volumes are in preparation.
Another major project has been preserving and renovating the cemetery in Veitzen (the Beis Hachaim and the Ohel), the resting place of this saintly Tzaddik. 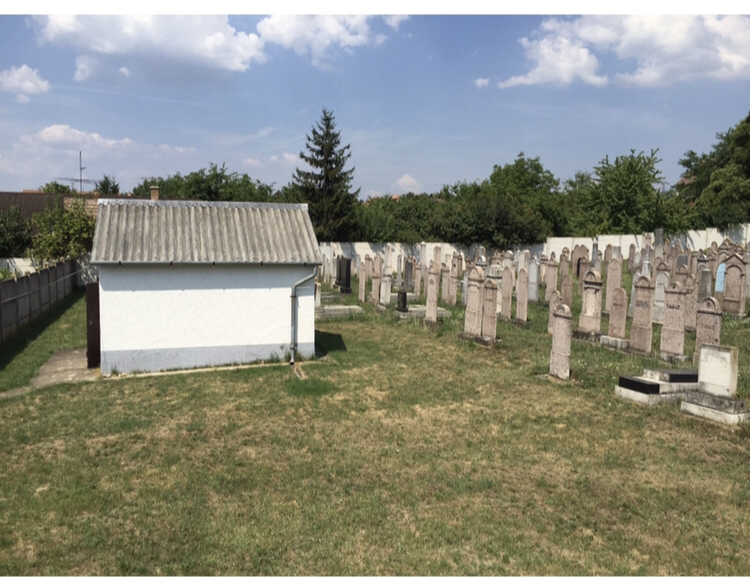 Over the last few decades, the crown of glory has been returned to its rightful place with throngs returning to the kever, led by the current Rebbe of Veitzen shlita, who untiringly advocates on behalf of Klal Yisrael.

The hope is that this year, like all other years, the Masei L’Melech’s yahrtzeit will be marked at his kever with the participation of the Rebbe shlita, with People living in Hungary , and visitors from all over the globe. Tefillos will be held on Thursday night on behalf of Klal Yisrael, who are at the moment going through difficult and turbulent times, and for each and every individual Jew whatever their need. May Hashem in His infinite mercy hear all our tefilos, Amen.

This Wednesday- Is Accounting a Career Option For You? Join the...

4th Elections? Coalition On Verge Of Collapse As Cabinet Meeting Is...