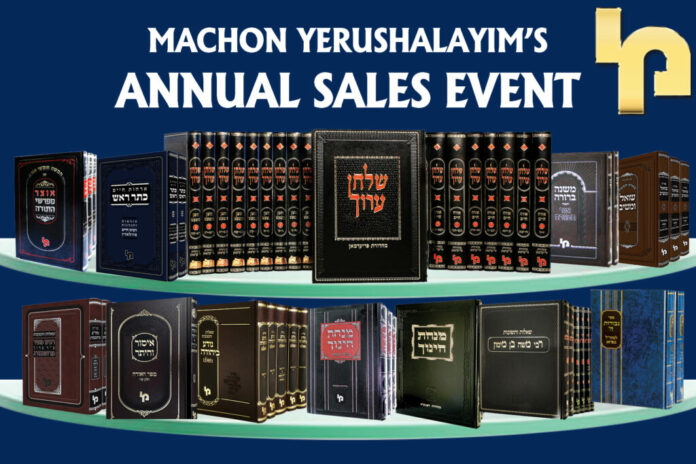 Following the large demand at book stores, many editions and titles have been sold out. Machon Yerushalayim has accordingly arranged for new shipments to be delivered to select book stores and chains.

Unprecedented prices combined with new titles, stunningly beautiful editions and magnificent sets have led to an all-time high in demand among Torah aficionados and scholars. As a result, many editions and titles have already sold out, though the “ANNUAL SALES EVENT” is nearly over.  One of the best sellers, OTZAR MEFORSHEI HATORAH,  a treasury of over 800 meforshim of the chumash, has almost entirely disappeared from the shelves. The volumes of the “Mishna Brura, Ohr HaMizrach”, the rulings of the Sephardic Gedolim alongside the rulings of the Mishna Brura, has been enthusiastically welcomed by the world of Halacha and has subsequently been in great demand, especially now, during the ANNUAL SALES EVENT with the newly released 4th volume.

Similarly, hundreds of copies of  Teshuvos HaRishonim titles, including Shu”t HaRambam, Shu”t HaR”Y MiGash, Ohr Zarua and Maharam MiRottenberg, taken from rare manuscripts and accurate versions, have been so well accepted in yeshivos and batei midrash, in learning communities and among dayanim. The  Sho’el U’Meishiv, in its newest edition, and the amazing work B’Shulei HaMinchah on the Minchas Chinuch, have also proven popular and have sold out at many locations, as have a number of fundamental seforim published by Machon Yerushalayim.

Fortunately, the Machon was informed early enough of the high demand and was able to arrange for the new shipment of thousands of sets, volumes and editions that have already reached select book stores and chains, enabling the wider public to continue enjoying the light of Torah in all its glory –at amazing, affordable prices.

Check Out The Sale TODAY!