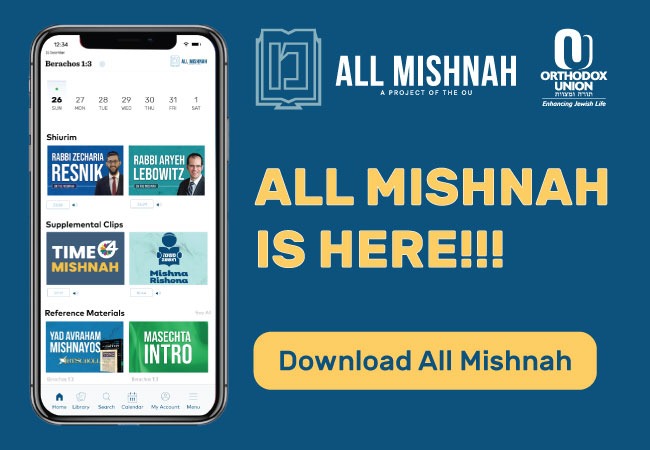 All Mishnah, a new mishnah app, now available for free download on your app store, or at the All Mishnah site

For so many across the Jewish world, that name conveys an entire message. Users of All Daf and All Parsha, the two Torah platforms that have transformed the lives of so many, understand the magnitude of the revelation of a new All Torah platform.

Yes, it marks the rollout of a new free app that allows users to access the greatest Torah resources on the Mishnah with the most contemporary, technologically advanced user experience.

But the All Mishnah app and its accompanying website can be a destination even for those who have not been users of the previously released platforms.

“All Mishnah is a platform where anyone can find top-tier content on the Mishnah,” Rabbi Moshe Schwed, who heads the All Torah initiatives for the OU, shares. “Similar to All Daf and All Parsha, it features high-quality content in the most user-friendly format, giving users a one-of-kind experience when they use it. But perhaps most importantly, it can empower those learning Mishnah Yomi with the tools and resources they need to achieve their goal.”

Mishnah Yomi is a program in which participants learn two Mishnayos each day and complete the entire Shisha Sidrei Mishnah in less than six years. The new cycle of Mishnah Yomi has just begun this past Shabbos, December 25, and the release of All Mishnah comes just in time.

“All Mishnah will open a path for learners of all levels to make daily Mishnah learning part of their lives,” explains Rabbi Moshe Hauer, Executive Vice President of the Orthodox Union.

The core of the All Mishnah platform is the premier shiurim on each Mishnah, delivered by leading talmidei chachomim and noted speakers. Included on the roster of maggidei shiur are Rabbi Aryeh Lebowitz, Rabbi Zecharia Resnick, Rabbi Joel Padowitz, with many additional shiurim currently in the pipeline, to be added in the coming months. Additionally, shiurim for children, delivered by Rabbi Fishel Schachter, are available through the Mishnah Reshonah system, which has been incorporated into the All Mishnah app. Another popular resource, Time 4 Mishnah, a part of the Time 4 Torah network, will be integrated into All Mishnah as well.

Being that the Mishnah-learning demographic includes children, who would also benefit greatly from the resources of All Mishnah, a call-in phone line is available via Mishnah Reshonah, (929 299 6700) allowing access to many of the platform’s benefits without the need for internet use.

Aside from the audio shiurim, the app includes the actual text of the Mishnah with a premium English translation. For this, the OU has been working with ArtScroll to bring the best in English Mishnah resources to All Mishnah, and app users will be able to access the Yad Avraham Mishnah by ArtScroll directly within the app.

The app will include a daily Mishnah calendar, in which users will be able to keep track of their progress through the Mishnah Yomi program. This customizable feature allows one to easily remain organized and in control of their daily commitment.

All Mishnah joins the venerable All Torah family of apps, which has been introduced last year but has already made an indelible impact on the Jewish world, becoming the go-to source for premium resources on Shas and the Parsha – all completely free of charge.

Download the new, free All Mishnah app, as well as the All Daf and All Parsha apps, from your app store, or visit the All Mishnah site