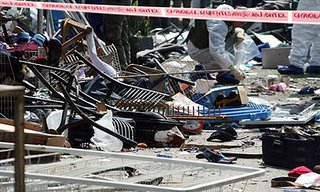 An Arab suicide bomber, blew himself up at a Tel Aviv fast food stand in the Neveh Shaanan neighborhood Monday afternoon, killing at least five civilians. At least 50 persons were wounded, with 15 sustaining moderate to severe injuries…… Of those seriously wounded, five are reported to be in mortal danger. An eye-witness at the scene, Rafi Hayun, told Israel radio that the terrorist was a female…. The Islamic Jihad terror group and the Al Aksa Brigades, the military wing of the Fatah party, have claimed responsibility for the attack. Fatah is the party of PLO chief Mahmoud Abbas, and his predecessor, PLO terrorist chieftain Yassir Arafat…………Interim Prime Minister Ehud Olmert responded to the first terror attack of his short tenure by saying that, “We will know how to respond. We know what to do.” The new Hamas-led PA government called the suicide bombing a legitimate response to Israeli “aggression.” Palestinian Authority Chairman Mahmoud Abbas denounced the attack, saying it harmed Palestinian interests, while Palestinians sources have reported that a large IDF force has entered the West Bank city of Nablus in response to the terror attack. “President Mahmoud Abbas condemned the terrorist attack in the bus station in Tel Aviv that led to the killing and injury of many,” his office said in a statement released by the official Wafa news agency…….