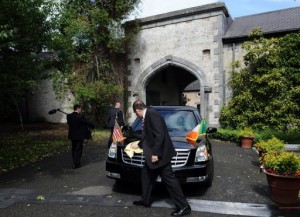 The U.S. Presidential Cadillac, nicknamed “The Beast” for its bomb-proof features, failed to make it out of the U.S. Embassy in Dublin on Monday when it became stuck on a ramp.

Barack Obama and his wife, en route to his ancestral home in County Offaly, had to abandon the car after the collision in front of waving crowds in Dublin.

Specially built for Obama, the General Motors (GM.N) vehicle boasts its own oxygen supply in case of chemical attack and armour-plated doors.

Click HERE to watch the video from a mobile device.

US President Barack Obama’s heavily armoured Cadillac, nicknamed “The Beast”, became stuck on a ramp at the US embassy in Dublin, RTE state radio reported Monday.

The first cars in the presidential motorcade emerged up the ramp from the car park beneath the complex in Ballsbridge and passed through the gates without incident, but The Beast quickly ran into trouble and got beached.

“The Beast was coming along and suddenly there was a loud kind of bang, metal-on-metal, grinding, crunching noise and the car was stuck,” an RTE reporter said.

The reporter said that as it drove out, the car appeared to have got its low underbelly caught on a piece of metal sticking up that a gate might lock into.

RTE said Obama and his wife Michelle stayed in the car while security officials and police officers went running over to the stranded vehicle.

After a while, the Obamas switched to another car to drive to the Marine Force One helicopter waiting to whisk them to the village of Moneygall, where one of Obama’s great-great-great-grandfathers came from.