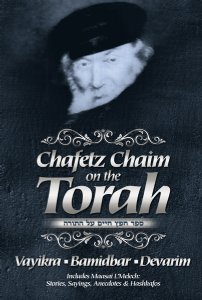 As Sefer Vayikra begins, we bring to the attention of our readers the appearance of a classic sefer, translated into English and now complete in two beautiful volumes. The Chafetz Chaim on the Torah is the authoritative (and authorized) rendition of the world-famous sefer Chafetz Chaim al Hatorah that was first published in 1943 by his talmid Rav Shmuel Greinemann, and has been reprinted dozens of times since. In the haskamah from Hagaon Harav Shlomo Heiman zt”l to the first edition, he encourages the author to translate the sefer into the vernacular, for the benefit of the general reader, citing as proof that the Chafetz Chaim did so himself by publishing many of his writings in Yiddish, in order to increase understanding among the masses. Surely the publication of these two thoroughly-researched, accurately-translated and handsomely-designed volumes would give the Chafetz Chaim great joy and nachas ruach, with the knowledge that his timeless teachings and Torah-true hashkafos and divrei Torah are being disseminated worldwide to an even greater audience than in the past.

This edition of the Chafetz Chaim includes the unparalleled “Maasai L’Melech,” a compilation of stories, sayings, anecdotes, explanations of Chazal, and general hashkafos of the Chafetz Chaim related to the dvar Torah it accompanies. This “sefer-in-a-sefer” alone is an invaluable asset containing a wealth of information and stories not found anywhere else.

The new volume, on Vayikra-Bamidbar –Devarim, also includes a section called “Essays and Public Letters.” This is a collection of fourteen “Kol Korei”s that the Chafetz Chaim wrote and publicized throughout Klal Yisrael, relating to issues of the times. Ranging from Shabbos to education, to Jewish soldiers, and to his famous farewell letter when he planned to emigrate to Eretz Yisrael, these essays and “ma’amarim” depict the Chafetz Chaim’s great love for Hashem and his care and concern for his fellow Jew, and are worthy of study in their own right.

Bring the heilige Chafetz Chaim to your Shabbos table – you will be uplifted and inspired, week after week! Available here or at your local Jewish bookstore.