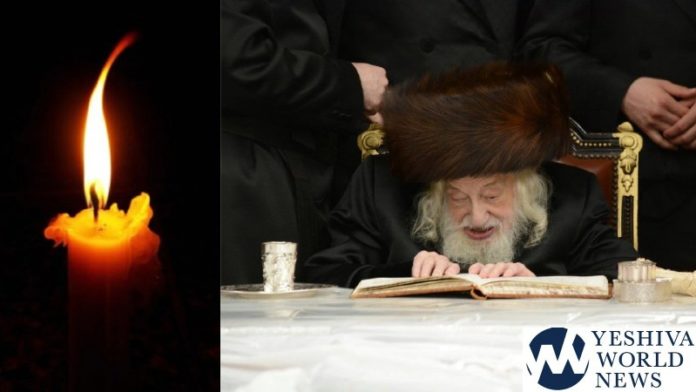 YWN regrets to inform you of the Petira of the Skulener Rebbe, Hagaon HaRav Yisroel Avrohom Portugal ZATZAL. He was 95.

The Rebbe was Niftar on Monday afternoon at John Hopkins University Hospital in Baltimore where he had been hospitalized for nearly two months.

The Levaya will be held on Tuesday morning at 11:00AM at the Skulener Bais Medrash on 13th Avenue and 54th Street, and the Kevura will be in Monsey at the Vishnitzer Bais Hakvaros.

THE FOLLOWING IMPORTANT LEVAYA INFORMATION WAS UPDATED AT 8:45PM ET:

The Rebbe was the son of Hagaon HaRav Eliezer Zusia Portugal ZATZAL, who founded the Skulener Chassidus.

Born in 1898, the previous Rebbe was barely 18 years old when his own father passed away and he became Rav of Skulen (Sculeni), where he served for 20 years. The young Rav established yeshivas that taught Torah to the uninitiated. His exemplary personal conduct and his beautiful, melodious voice inspired all who heard him sing his own tunes and compositions.

In 1959, the Rebbe was imprisoned together with his father, who served as father–and mother–to thousands of Holocaust orphans who called him father to this very day.

The Rebbe was one of the oldest admorim in the world.

He ran the “Chesed L’avraham” organization founded by his father.